The Jackdaw of Rheims 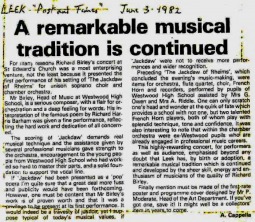 Although my year up in Staffordshire was not a good one in most respects, there were some positives to savour: this setting of the Ingoldsby Legend [written by "Thomas Ingoldsby" aka Richard Harris Barham] is of the best and most popular of all the legends [there are three volumes, published in the 1840s, copies of various editions of which are to be found in many second-hand bookshops, with some fabulous illustrations - I have an edition illustrated by Arthur Rackham]. The illustration below was done especially for me by the art master in the schhol where I taught, Peter Moderate. It is perfection itself!

This recording was made by the Occasional Singers in live concert conditions. The review below was of the original first performance, and as there are so few reviews of my music [and this is such a nice one!] I feel justified exposing the vain side of my character...

A remarkable musical tradition is continued

For many reasons Richard Birley's concert at St Edward's Church was a most enterprising venture, not the least because it presented the first performance of his setting of the Jackdaw of Rheims for unison soprano choir and chamber orchestra.

Mr. Birley is a serious composer, with a flair for orchestration and a deep feeling for words. His interpretation of the famous poem by Richard Harris Barham was given a fine performance, reflecting the hard work and dedication of all concerned.

The scoring of 'Jackdaw' demands real musical technique and the assistance given by several professional musicians gave strength to the orchestra, and encouragement to the young people from school who had worked so hard to master their parts, and a solid foundation to support the vocal line.

If 'Jackdaw' had been presented as a 'pop' opera I'm quite sure that a great deal more fuss and publicity would have been forthcoming. However, one must be content that Mr. Birley's work is of proven worth and that it was a privilege to be present at its first performance. It would indeed be a travesty of justice, yet I suppose is typical of today's musical values, if 'Jackdaw' was not to receive more performances and wider recognition.

The review is then about the rest of music, but it does conclude with the following:

Finally mention must be made of the first-rate poster and program can designed by Mr. P. Moderate, head of the art department. If you've got one, save it! It might well be a collector's item in years to come.


This recording [live performance] was made in St Mary's Church, Dorchester, with the Occasional Singers: 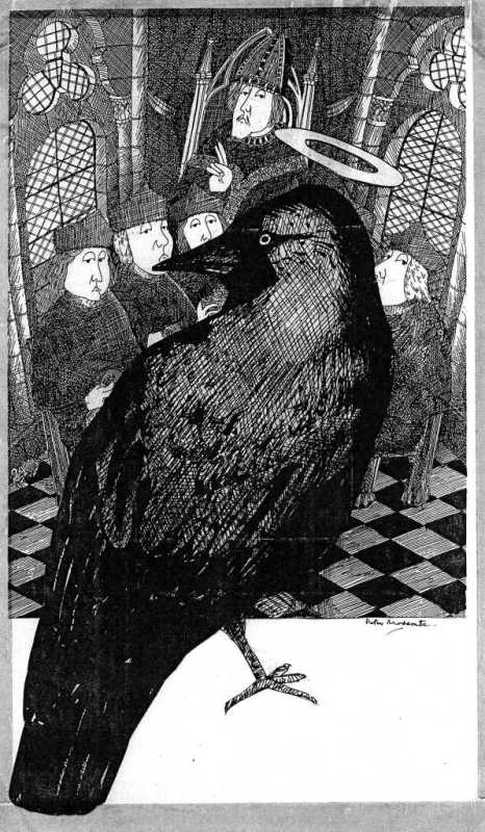 The Jackdaw - of Rheims [by Peter Moderate]

The Jackdaw of Rheims

The Jackdaw sat on the Cardinal’s chair!
Bishop, and abbot, and prior were there;
Many a monk, and many a friar,
Many a knight, and many a squire,
With a great many more of lesser degree, -
In sooth a goodly company;
And they served the Lord Primate on bended knee.
Never, I ween, was a prouder seen,
Read of in books, or dreamt of in dreams,
Than the Cardinal Lord Archbishop of Rheims!

In and out through the motley rout,
That little Jackdaw kept hopping about;
Here and there like a dog in a fair,
Over comfits and cates, and dishes and plates,
Cowl and cope, and rochet and pall,
Mitre and crosier! he hopp'd upon all!
With saucy air, he perch'd on the chair
Where, in state, the great Lord Cardinal sat
In the great Lord Cardinal's great red hat;
And he peer'd in the face of his Lordship's Grace,
With a satisfied look, as if he would say,
"We two are the greatest folks here to-day!"
And the priests, with awe, as such freaks they saw,
Said, "The Devil must be in that little Jackdaw!"

The feast was over, the board was clear'd,
The flawns and the custards had all disappear'd,
And six little Singing-boys - dear little souls!
In nice clean faces, and nice white stoles,
Came, in order due, two by two,
Marching that great refectory through!

A nice little boy held a golden ewer,
Emboss'd and fill'd with water, as pure
As any that flows between Rheims and Namur,
Which a nice little boy stood ready to catch
In a fine golden hand-basin made to match.
Two nice little boys, rather more grown,
Carried lavender-water, and eau de Cologne;
And a nice little boy had a nice cake of soap,
Worthy of washing the hands of the Pope.
One little boy more a napkin bore,
Of the best white diaper, fringed with pink,
And a Cardinal's Hat mark'd in "permanent ink."

The great Lord Cardinal turns at the sight
Of these nice little boys dress'd all in white:
From his finger he draws his costly turquoise;
And, not thinking at all about little Jackdaws,
Deposits it straight by the side of his plate,
While the nice little boys on his Eminence wait;
Till, when nobody's dreaming of any such thing,
That little Jackdaw hops off with the ring!
There's a cry and a shout, and a deuce of a rout,
And nobody seems to know what they're about,
But the Monks have their pockets all turn'd inside out.
The Friars are kneeling, and hunting, and feeling
The carpet, the floor, and the walls, and the ceiling.
The Cardinal drew off each plum-colour'd shoe,
And left his red stockings exposed to the view;
He peeps, and he feels in the toes and the heels;
They turn up the dishes, - they turn up the plates, -
They take up the poker and poke out the grates,
- They turn up the rugs, they examine the mugs: -
But, no! - no such thing; - they can't find THE RING!
And the Abbott declared that, "when nobody twigg'd it,
Some rascal or other had popp'd in, and prigg'd it!"

The day was gone, the night came on,
The Monks and the Friars they search'd till dawn;
When the Sacristan saw, on crumpled claw,
Come limping a poor little lame Jackdaw!
No longer gay, as on yesterday;
His feathers all seem'd to be turn'd the wrong way; -
His pinions droop'd - he could hardly stand -
His head was as bald as the palm of your hand;
His eye so dim, so wasted each limb,
That, heedless of grammar, they all cried, "THAT'S HIM! -
That's the scamp that has done this scandalous thing!
That's the thief that has got my Lord Cardinal's Ring!"

The poor little Jackdaw, when the Monks he saw,
Feebly gave vent to the ghost of a caw;
And turn'd his bald head, as much as to say,
"Pray, be so good as to walk this way!"
Slower and slower he limp'd on before,
Till they came to the back of the belfry door,
Where the first thing they saw, midst the sticks and the straw,
Was the Ring in the nest of that little Jackdaw!

Then the great Lord Cardinal call'd for his book,
And off that terrible curse he took;
The mute expression served in lieu of confession,
And, being thus coupled with full restitution,
The Jackdaw got plenary absolution!
- When those words were heard, that poor little bird
Was so changed in a moment, 'twas really absurd.
He grew sleek, and fat; in addition to that,
A fresh crop of feathers came thick as a mat!
His tail waggled more even than before;
But no longer it wagg'd with an impudent air,
No longer he perch'd on the Cardinal's chair.
He hopp'd now about with a gait devout;
At Matins, at Vespers, he never was out;
And, so far from any more pilfering deeds,
He always seem'd telling the Confessor's beads.
If any one lied - or if any one swore -
Or slumber'd in pray'r-time and happen'd to snore,
That good Jackdaw would give a great "Caw!"
As much as to say, "Don't do so any more!"
While many remark'd, as his manners they saw,
That they "never had known such a pious Jackdaw!"

He long lived the pride of that country side,
And at last in the odour of sanctity died;
When, as words were too faint his merits to paint,
The Conclave determined to make him a Saint;
And on newly-made Saints and Popes, as you know,
It's the custom, at Rome, new names to bestow,
So they canonized him by the name of Jim Crow!