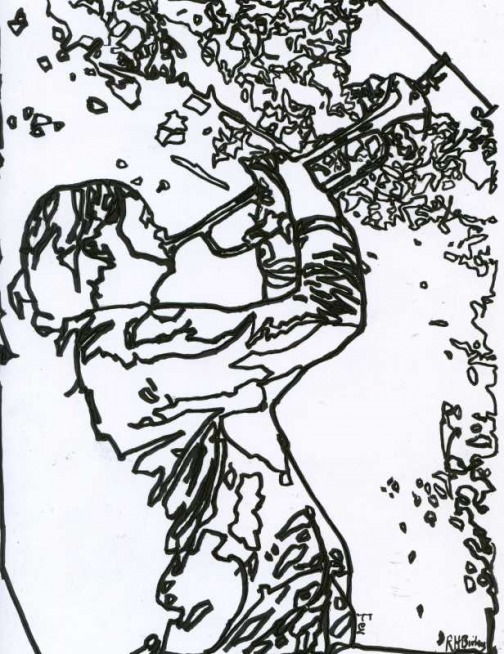 Several years ago, whilst I was convalescing from major shoulder surgery (for the second time), I also found sleeping difficult - actually I still only sleep for up to three hours and frequently work in the small hours. I could not do a great deal and started to play around with some light swing arrangements of some of my favourite numbers, getting my 'virtual band' to perform the music. As I [live and] work in the basement [a dry-lined cellar] I called this little collection 'Rick's Basement Jazz'. Although I have done over thirty arrangements, there are only a very few anywhere near fit for playing... here they are:

Don't get around much anymore

This is an original jazz miniature I composed for a student band at college - variously called 'Big Bird', 'Yellow Bird', 'Big Sneezer' and this title - 'Hay Fever' which is what the lyrics [which I also made up but have now lost...] refer to.

It don't mean a thing if it ain't got that swing

Slurry with the fridge on top....

The girl from Ipanema

Let's do it, let's fall in love

Fly Me to the Moon

2 Nice work if you can get it

3 Love is here to stay

Why these three Gershwin arrangements were done:

When a member of my choir announced her engagement, we were under starter's orders to provide some form of music for her big day. The venue was the registry office - the council chamber - in Weymouth and I knew something carefully designed was called for. For the first time in either my or the choir's life we were going to have karaoke for her wedding ceremony!....

The plan was quite audacious, and as far as the registrar was concerned utterly unique: I would have a CD of the tracks required to which would be added live choir and a soloist. The one and only coming together of these forces would be the actual marriage ceremony itself, as the venue was in use before our booked slot, and the soloists [Abbi Temple & Gareth Jones] were going to get to the event with no time whatsoever to spare. So - no rehearsal, no sound check,  no checking of the balance. What a helluva responsibility on me and the choir to be completely prepared on the day!

And it all worked a dream, as the saying goes: I set up the 'ghetto blaster' and prayed that the CD itself would behave, put the choir in as good a position as we could find, and waited nervously for the soloists to arrive. Everyone who was supposed to be there was, with seconds to spare in Gareth's case, and each part of the jigsaw was thoroughly rehearsed, so the whole thing worked, to the bride's delight and my relief.

Again I recently came across this old mp3 of a few nursery rhymes (and more....) that (in some idle moments) I arranged for a Big Band. The sounds are not EastWest, but the old "Garritan Personal Orchestra" sound library I used some years ago. There are quite simply two banks of sound: a saxophone choir and a larger brass group, all underpinned by pizzicato bass.

The last number is another recording of Hay Fever, as 'performed' by "Garritan Personal Orchestra" sound library.