Boats on running moorings (i) (acrylic)

Solva harbour: these are little tenders on running moorings, used to take folk out to their bigger boats on moorings. Boat shapes are so graceful from almost any angle. The first of these paintings is done entirely with palette knife, the second with brushes. Both are on canvass and are finished with a satin varnish. 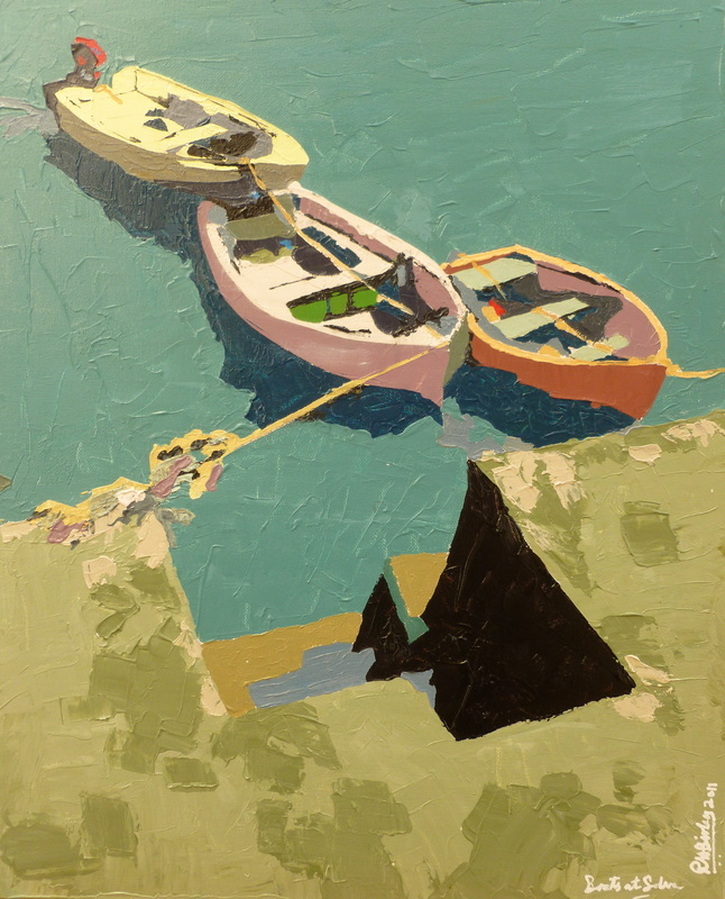 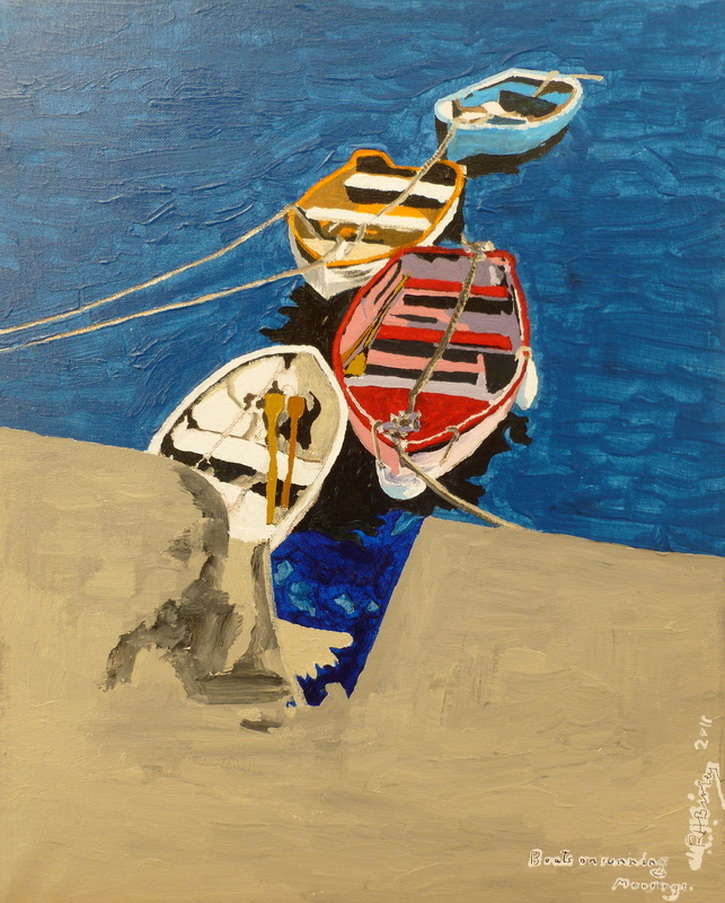 I am a little bit obsessed with this view of the wet sand at the south end of Whitesands, when the tide exposes so many acres of sand. It is always beautiful, whatever the weather, whatever the light. There are other pictures here too of this wonderful area.

Wet sands on Whitesands (i) [gouache] 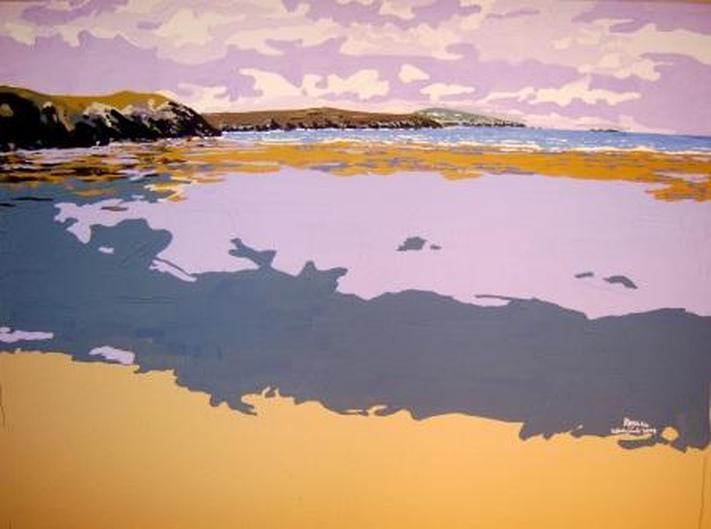 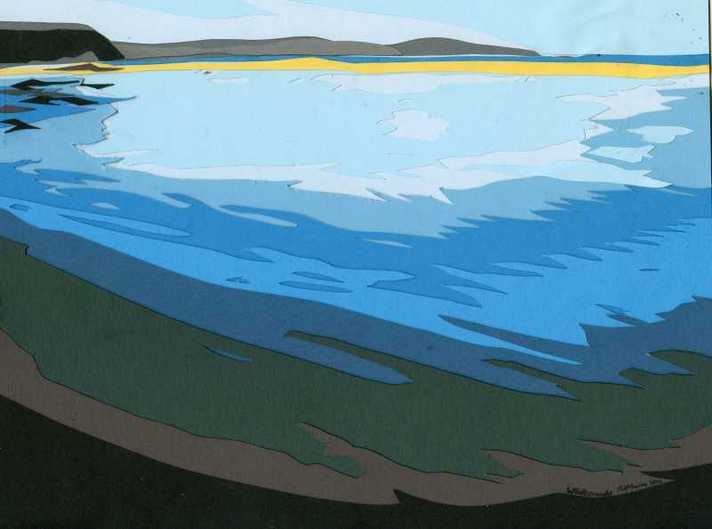 All the layers of this picture are cut out of coloured paper/card to create what is, effectively, a print. I love its clean lines.... 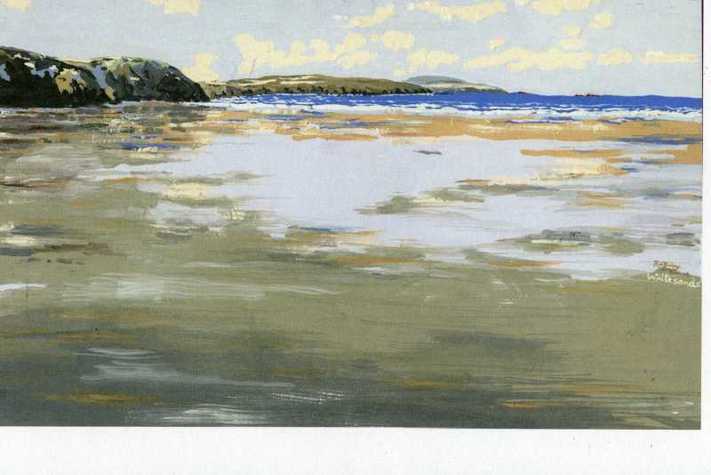 This is the second attempt at capturing the wetness of the sand at the south end of Whitesands - always a wonderful sight, especially when un-marked by any footprints [ie from about October through to March, when the tide is out early in the morning....] 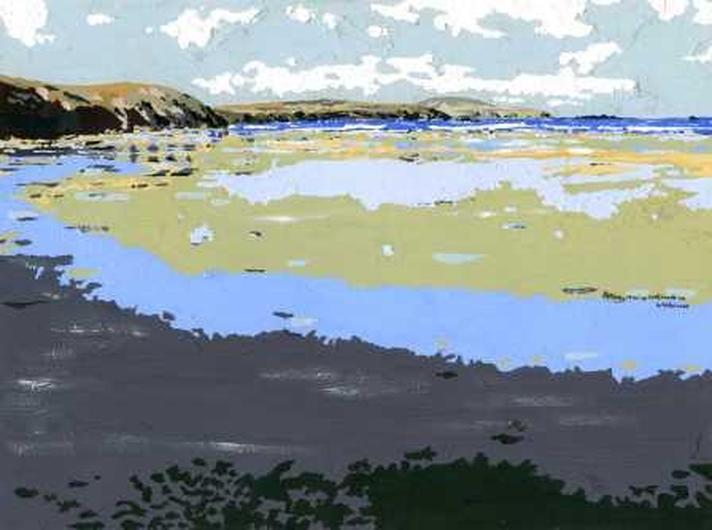 Yet another attempt to capture the beautiful wetness of the beach at low tide....

This is the last of this particular set of 'wet sand' studies - the paint is applied much wetter than the other pictures and the result is pleasingly effective, in my view. 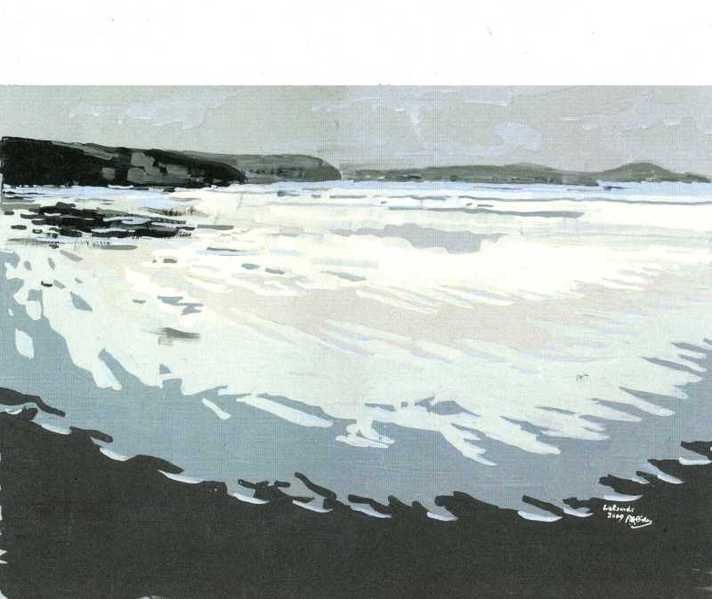 Steps down to Whitesands (i) [coloured drawing] 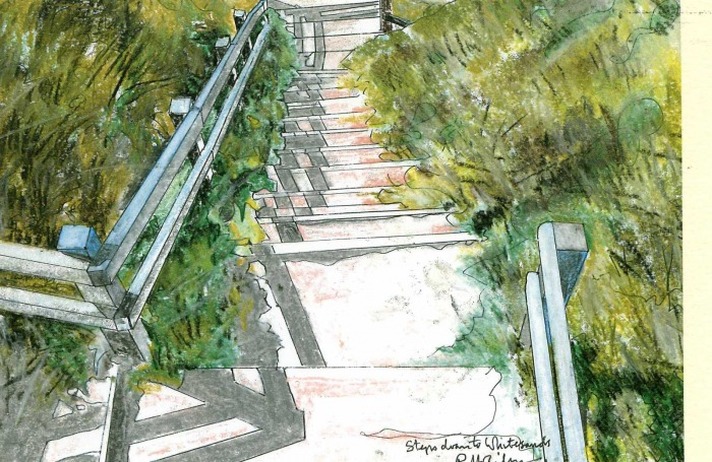 Steps down onto Whitesands beach 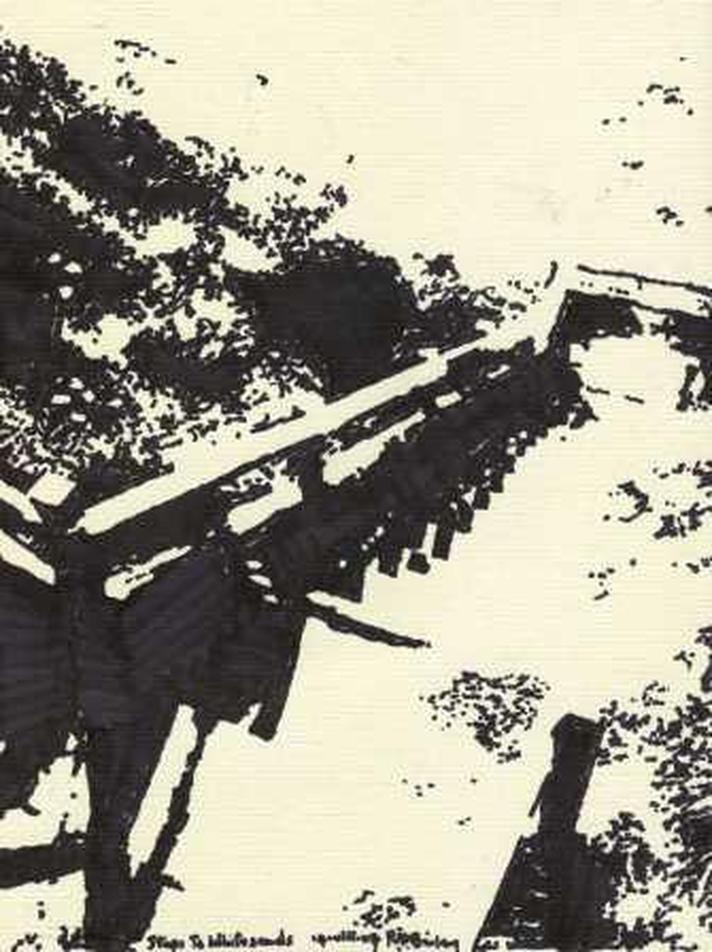 Steps down onto Whitesands beach

A favourite wander takes us out to the St David's Head promontary, from where there are glorious views all round, especially out to the Bishops & Clerks, and south to Ramsey. The patterns of water movement here are awesome - billions of tons of water passing each few hours up and down. Depending on the swell, the wind strength and direction, and the size of tide [neap/spring] the sea murmurs or boils, and occasionally in a good gale, erupts into a frenzied demonstration of raw power that few other places can match: the waves sometimes crash so heavily onto the head itself that the spume, in substantial form, comes right over the end chunk of rock. The forces are enormous and the lower head is not a safe place to go - indeed there is a plaque close to the edge commemorating an unfortunate photographer who was swept off by a large wave and carried to his death somewhere in the Sound.

"In affectionate memory of James Duncan Smith of the Chancellor's Manor St. Davids, who was washed off this ledge of rock on the 26th of August 1901. His body was recovered in Ramsay Sound on the 14th of September and was buried in the Mumbles Cemetry on the 19th of September 1901"

There is very little, if any, local reference to this plaque, or to the story of James Duncan Smith. None of the guides I have seen mention him, which I find strange. I do not know for sure, for example, that he was a photographer - but remember being told such as a child. I do not know when or how the plaque was laid - it is a sizeable marble slab bolted at each corner into the rock, and could have been carried to the headland and lowered with ropes down the final bit of rock; it is a bit of of a scrambled descent but not very difficult.

What is indisputable is that his body would have been swept up and down the Ramsay Sound over the nearly three weeks before it was recovered.

And from time to time there are drowning accidents in these dangerous waters - though since the existence of the Whitesands beach lifeguards these have all but disappeared.

Ramsey Island from near St John's Point - acrylic on canvass

This is one of my favourite views of all - cliffs on the way round to St John's Point, with the north end of Ramsey Island across the Sound. There really are skies a bit like this, though my take in this case is somewhat experimental.... I had a special place in mind to hang this canvass - see below: 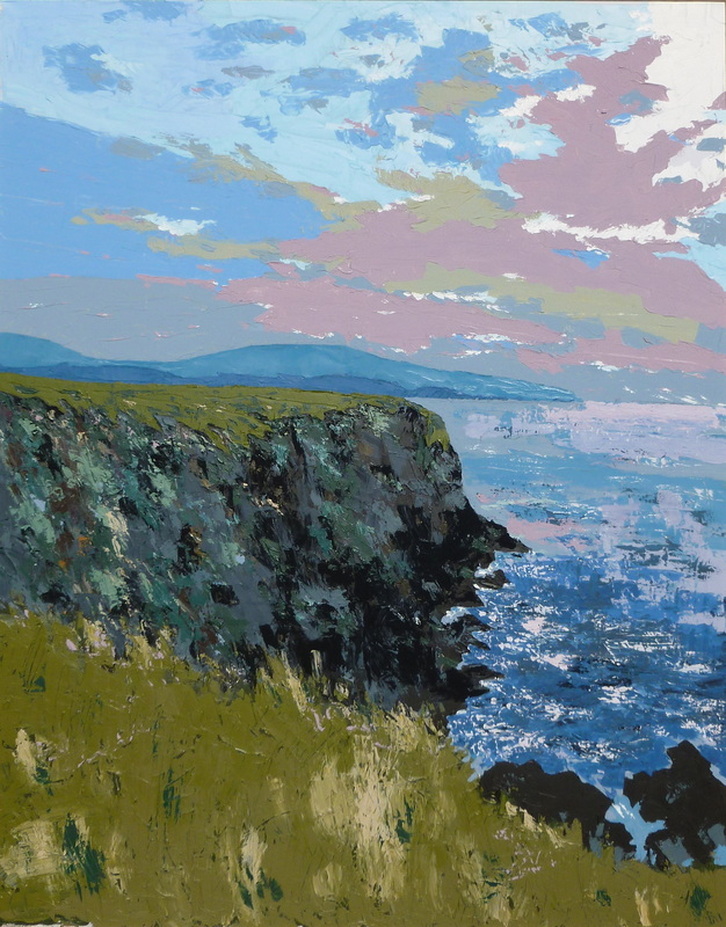 I hung this canvass out in the side passage, in our Dorchester home. This is the view of it through the window to the side passage. There is a further unplanned effect, which is that as one views the painting through the old Victorian panes of glass, the sea moves very slightly, as you move. It gently coruscates! It is a lovely reminder in Dorset of the magic of the Pembrokeshire coast. 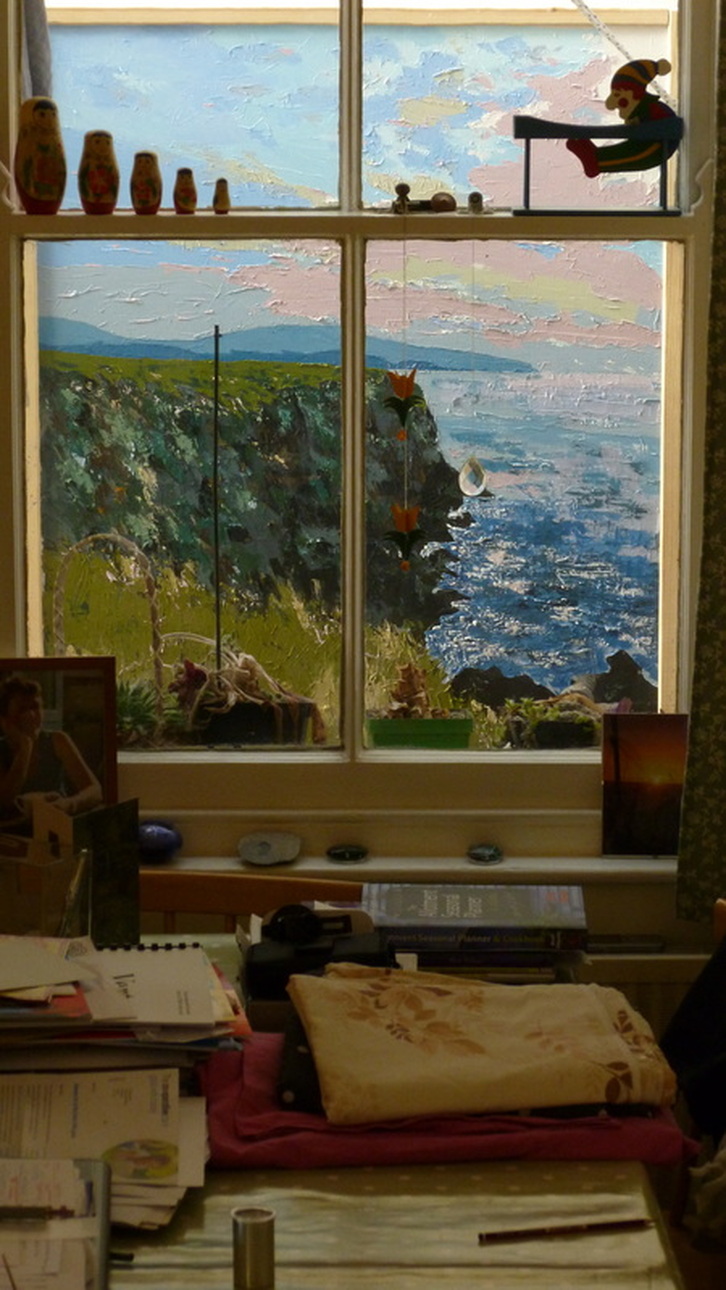 Room with a view (acrylic on canvas) 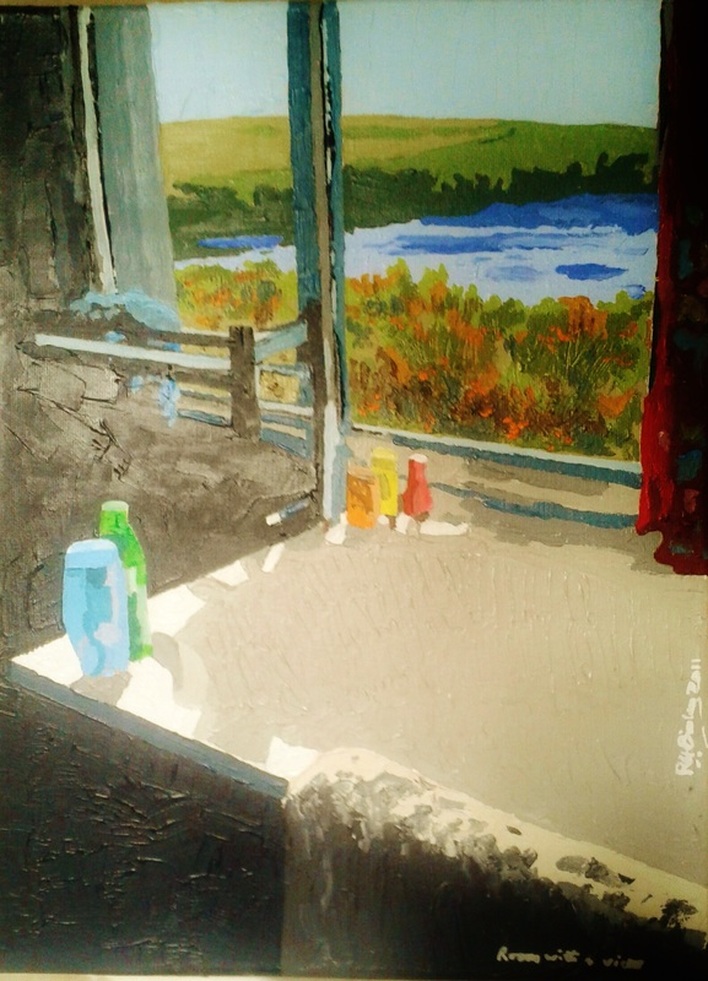 (This is a very poor image, taken with my mobile phone. I will replace it sometime.... The painting is of the view seen while sitting on the loo at the Bung) 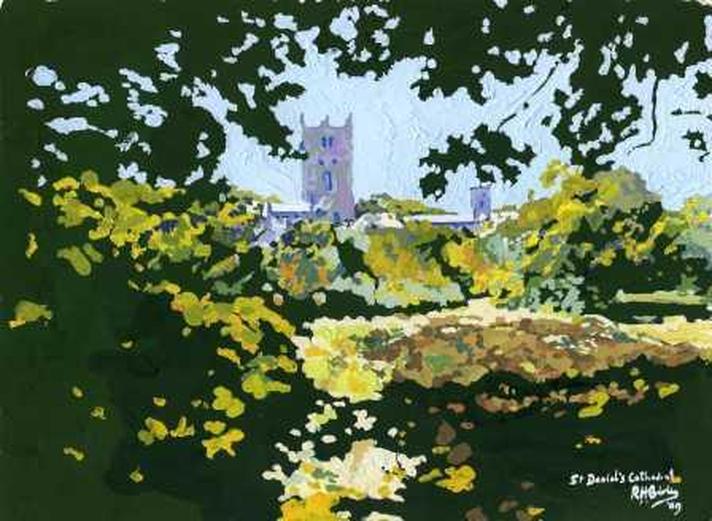 This is a view of the cathedral from the road that leads down past the old school to where the various canonic residences are - the equivalent of the more usual 'close' found next to many city cathedrals. 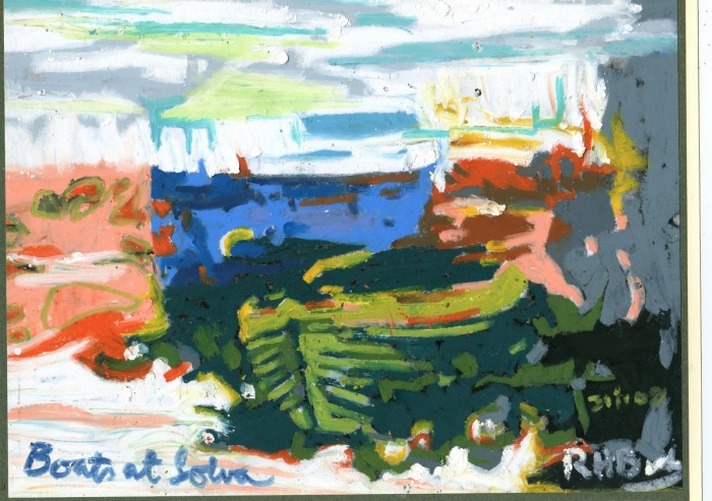 A great deal of the best  time I have spent anywhere  has been in Pembrokeshire. This picture is of boats in Solva harbour - lovely old clinker ones - which have always fascinated me. We kept our bigger sailing boat 'Pumpkin' here, so many were the days spent entertaining myself in the rubber dinghy whilst my parents were on the boat doing some repair or another.  As Ratty [Wind in the Willows] loved 'just messing around' on his beloved river, so, for as long as I can remember, I have loved 'just messing around' on the waters off the St David's peninsula. And what waters, these! - the massive tidal surge twice daily inexorable in its power, up and down, and for ever up and down again... I have sailed pretty close to the wind, so to speak [broken masts by the South Bishop lighthouse nearly five miles off-shore.... capsized with a dislocated shoulder in Ramsey Sound....] in these awe-inspiring races, loving the taste of danger and the thrill of skimming across such unknown forces. 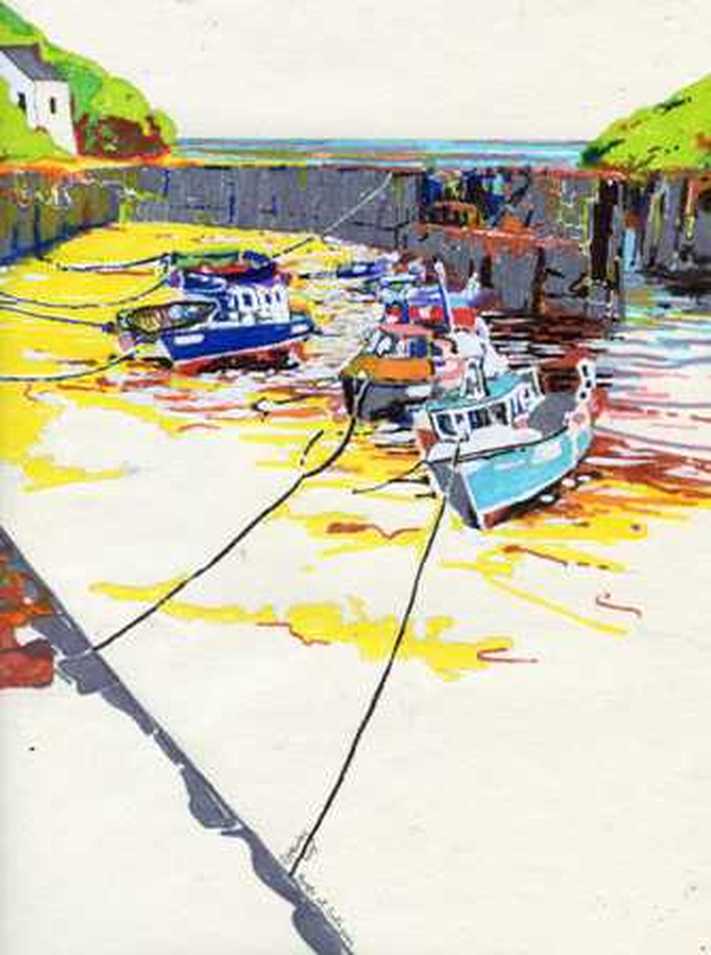 Porthgain - a delightful, if a bit overpopular [and touristy], little harbour on the north Pembrokeshire coast. It used to be very special, with a pub for locals only, and Guinness that I was sure was piped direct from the Emerald Isle, so refreshing was a pint of it after walking from Whitesands Bay. There are amazing industrial relics and the landscape to the south is sculpted by extraction and a railway system. But for me the most mind-boggling sight is the sizes of the ships [now of course just seen in photographs] that used to tie up alongside the hoppers that are built into the hill on the left of this picture.


This boat actually comes from Portland, but it seems a good place to display the pictures here!... They are papercuts.

Tremynydd Fawr
Aberdinas and Porth Tre-wen are the two most magical of all the beaches and bays in the northern stretch of Pembrokeshire coastline, beyond Penmaen Dewi [St David's Head]. Here, where every year many seals produce their white pups in the various caves, I have many memories knitted together into a composite and seamless fabric, comfortingly worn like a favourite jumper. Memories of the seals, yes, but in the eyes-closed-cinema of my mind it is my family whose silent laughter fills my heart with a yearning that almost seems to stretch out across that unbridgeable gap. It is the best kind of haunting....

And why this tree, this farm? Tremynydd Fawr is where we used to leave the car. Nowadays we leave the car off the road, and walk down past the farm and down the track.

The kaleidoscope of images include the "polo mint"; the slippery scree descent to the main beach; the underwater swim beneath the rocky arch; "Australia" [a rock formation...]; the near-inaccessible offshore island; the caves; the narrow rock-pooled passage through to Porth Tre-wen; fires and sausages, baps and penguin biscuits; and the narrow-ledged passage down to the remains of a small dwelling - a shelter? - perhaps a chapel? - leading via a rough-hewn roofless tunnel to where the waves pound endlessly the mighty fortess of rock. Here it was that my first dog jumped in to the sea to swim round into the bay, while I climbed round. She grew tired and tried to get back onto the rock, which was too steep. Eventually I reached her, this poor, bedraggled and now exhausted animal grateful to be scuff-necked to the firm security of barnacled rock. And the seals looked on in dumb curiosity. 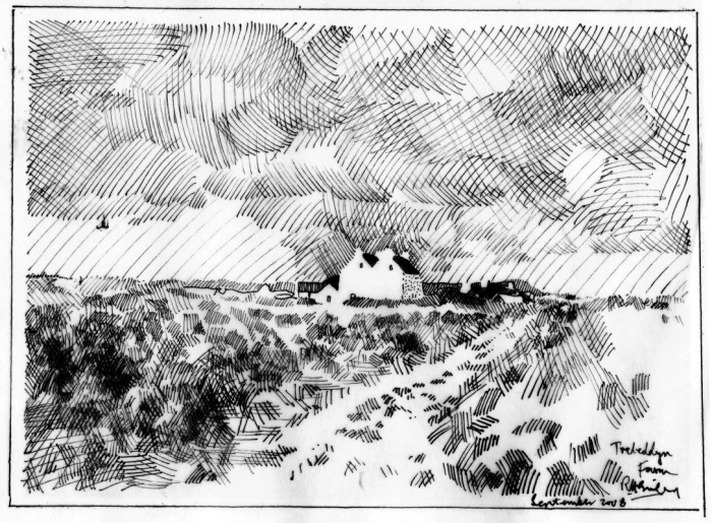 This is the house and farm at the top of the fields through which we drive to get to Cae Rhedyn, and it was here in around 1780 that there once lived our own version of Grace Darling - Mrs Blanche Williams - who launched a small sailboat from Porth Sele to rescue, single-handed - some shipwrecked Swedish sailors she had spotted clinging to one of the soon-to-be-immersed off-shore rocks. The story is not widely known but demonstrates enormous courage and great physical strength and skill. It's hard enough launching a relatively light fibreglass dinghy out over small waves on a sunny summer's day, let alone a heavy wooden clinker boat through stormy surf and with no-one around to assist. And that's just the beach bit - the off-shore waters, the fast and furious race, the wind-against-tide savagery of the sometime huge seas, and then having to get close up to some surf-lashed rock! Wow! Some courage, some risk, some fortitude.... 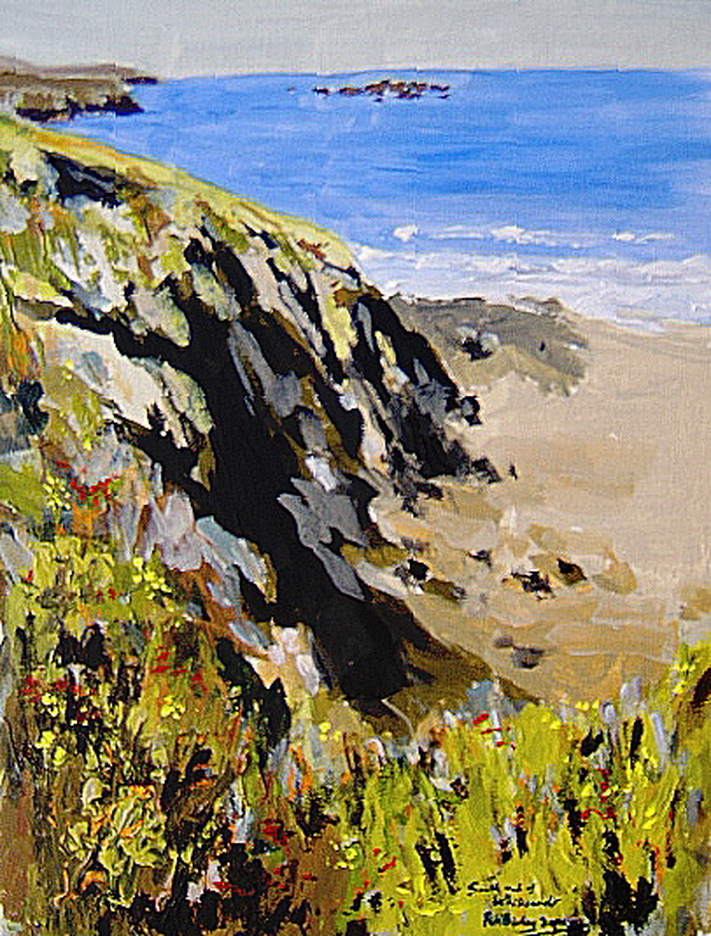 
​St Davids Head from near Aber Dinas [acrylic on card] 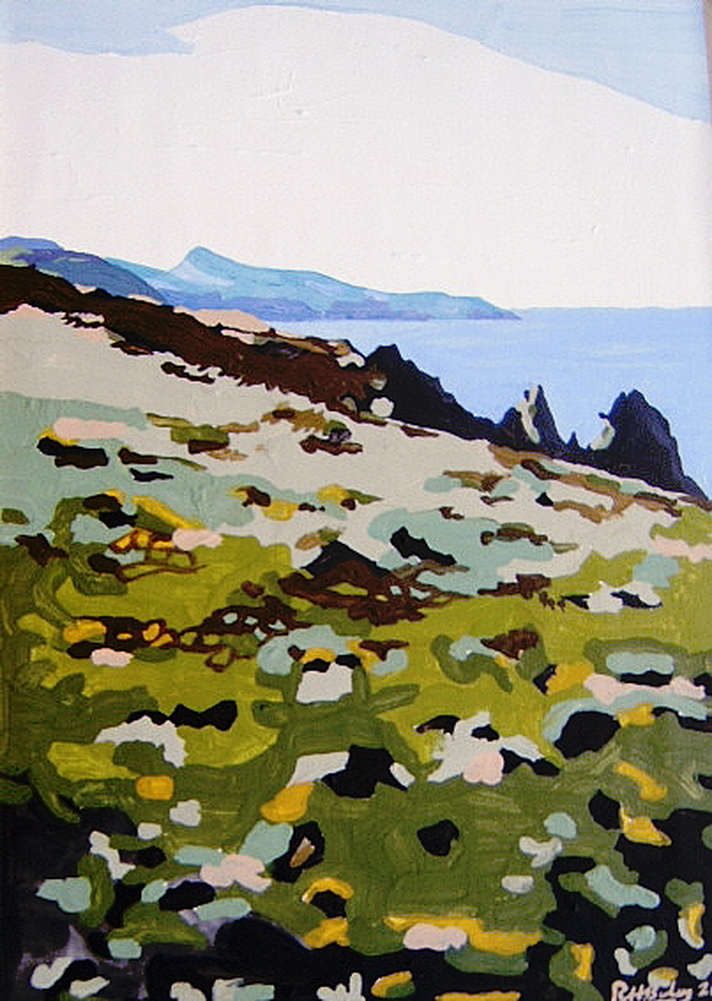 View of St David's Head from the north coast - Acrylic 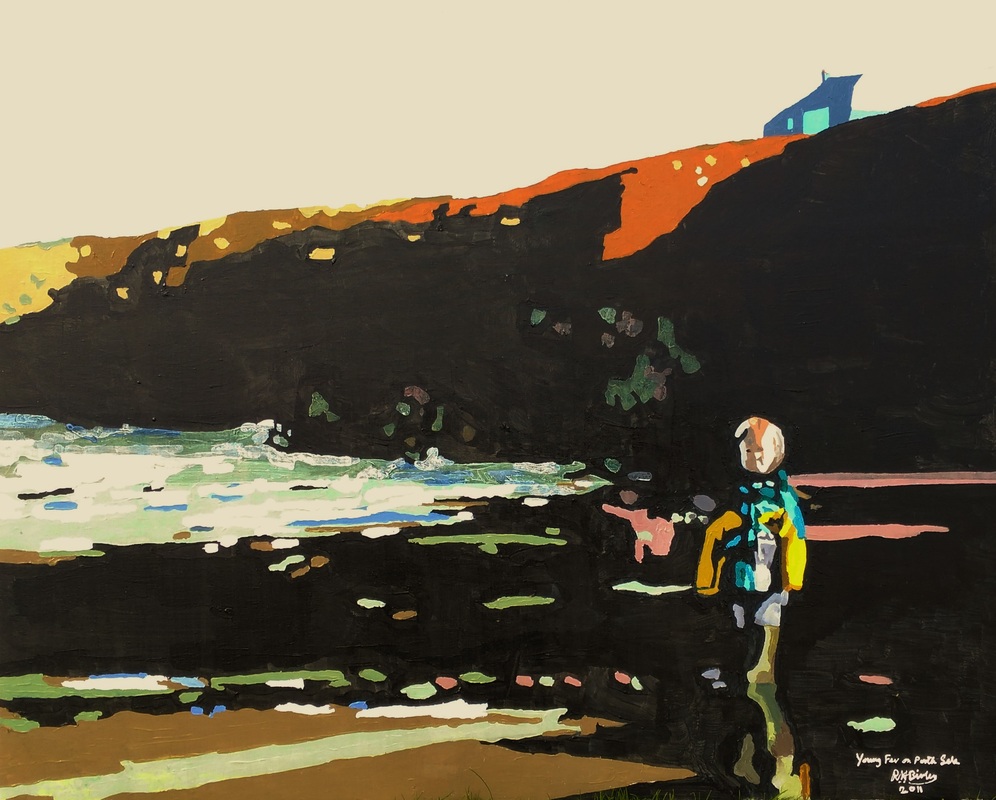 ​Rock below the Bung on Porth Sele, recently damaged by heavy seas [acrylic] 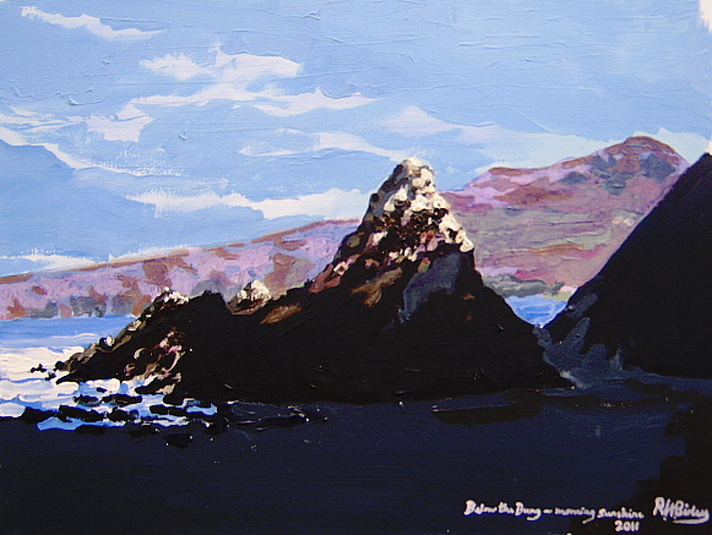