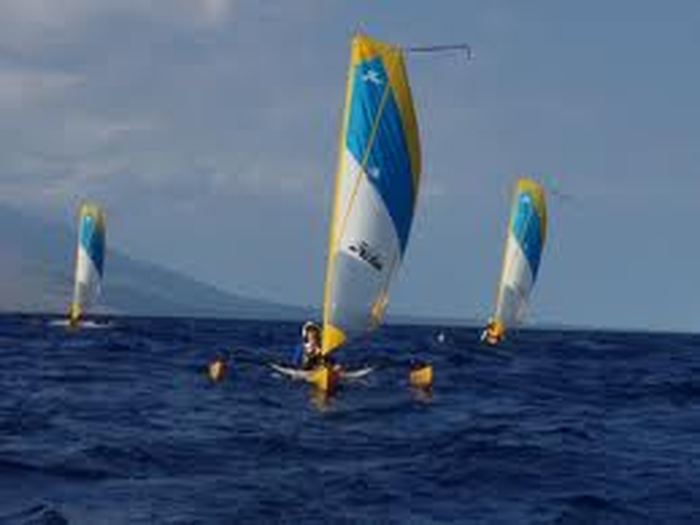 My last dinghy sailing had been in the Pembrokeshire waters of Ramsay Sound, about five years ago. I had capsized, and in righting the hull had dislocated my right shoulder again. With considerable difficulty I sailed back to shore, and that was my last ever sail.... my family removed the boat from the beach and not long afterwards I sold it. I assumed that I would never sail again.

However in recent times I have begun to rehabilitate myself somewhat, as advised by my friend Rob who also suffers from PD. Rather than just give in to the wretched disease, I have set about seeing what I can still do, including beginning once more to sail. At this stage the idea was just a fruitless fantasy....

Then, over the summer, I decided to start eating fish again, as my joints [knees in particular] are wretched and about the only way to take the necessary minerals your body neds to function properly is to eat fish. All the past years not eating fish has probably deprived me of  lots of goodness for which my joints have craved, and it's time to redress this deficiency - hence I bought some fishing tackle and started casting off the rocks just below Cae Rhedyn [where we holiday in Wales]. Only I was having considerable difficulties scrambling down the cliff and keeping safe and steady on the uneven rocks. Almost the first cast upset my balance - I was standing - and I fell. Using my right arm instinctively to break my fall I once again dislocated my shoulder - horror! Yet although I felt the all-too-familiar discomfort, I also realised that the second surgery I had undergone, which included a bone graft to make it almost impossible for the joint to come right out, had worked: my shoulder gradually 'reduced' [the technical term for the joint going back into its correct place] and although I was in considerable pain and the arm was numb at least I was not facing another hospital visit. I spent the next ten days or so fishing - off St John's Point - and made sure to be sitting down whilst casting. Getting down the cliff to my water's edge spot was tricky, slow and tiring, but just about feasible for me.

Needless to say I caught nothing over the entire fortnight  (except of course some seaweed....) and managed to lose some tackle into the bargain. I wondered if perhaps it wouldn't be better - and actually safer - to fish from a small boat. And that's how I came to discover the Hobie Adventure Island - surfing the net looking at boats. I knew that I couldn't possibly be safe in a kayak, but could not resist looking at the new generation of fishing kayaks. The Adventure Island came up on screen and I knew instantly that actually this boat was not just perfect for fishing from, but was also a fantastic sailing boat. And SAFE! It is a kayak with stabilizers! A trimaran... and what's more would be a faster boat than any of my previous dinghies.

To cut a long story short, I ended up buying the demo model [a 2009 version] from the Hobie Centre at Rockley Point, Poole. And I have been offered a place to keep the thing, on the old CCSC dinghy rack on Castle Cove beach, by a band of Hobie enthusiasts [three in total]. They have made me feel very welcome. Come the Spring, my adventure will begin!

Here are some pictures of the Hobie Adventure Island [all off the web, and not very high-grain quality]: 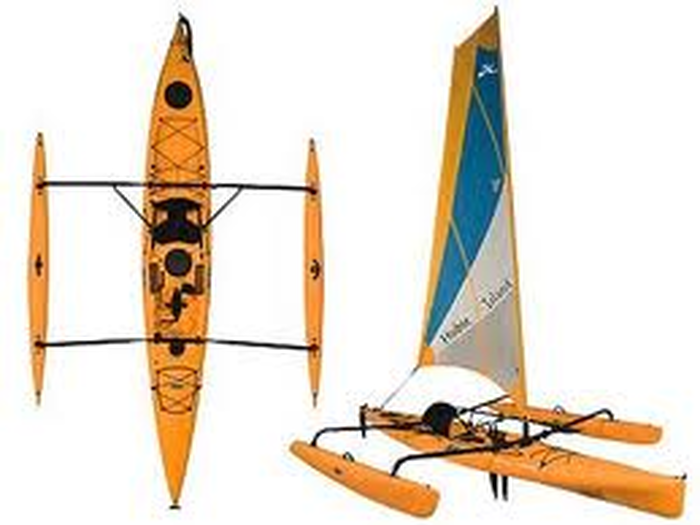 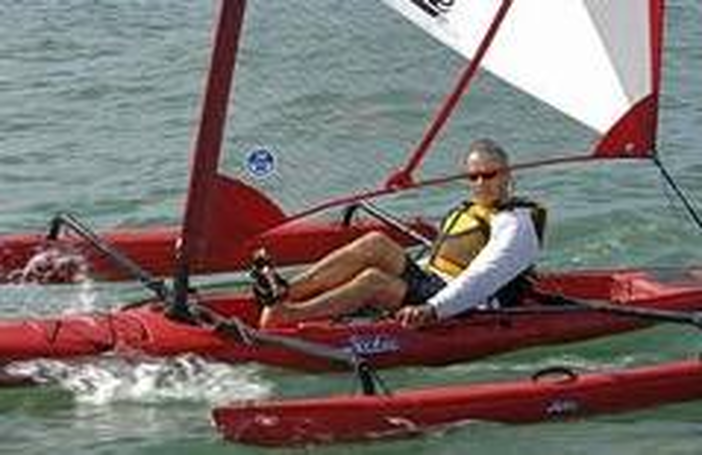 I  have found a place to keep my new boat - on the very same dinghy rack on which, many years ago, I used to keep my Tonic dinghy, GP14 and [later] my Wayfarer. This is the rack on Castle Cove beach, which used to be the territory of the Castle Cove Sailing Club who have since moved down the road to Phil Gollop's old site.

I was fortunate to have been made very welcome to join three other intrepid Hobie Adventure Islanders [one has since graduated to the Tandem] - modifications were made to their special rack to accommodate my kayak.

This YouTube video is of my new-found Hobie AI friends. Tim Snape made it and several more as well. If you want to see the other videos made by Tim then I suggest you go onto YouTube.... they are all fun.


I did some portraits of Tim and Russ from photos I took when I met them for the first time. I think I'm going to enjoy sailing with this litle gang.... 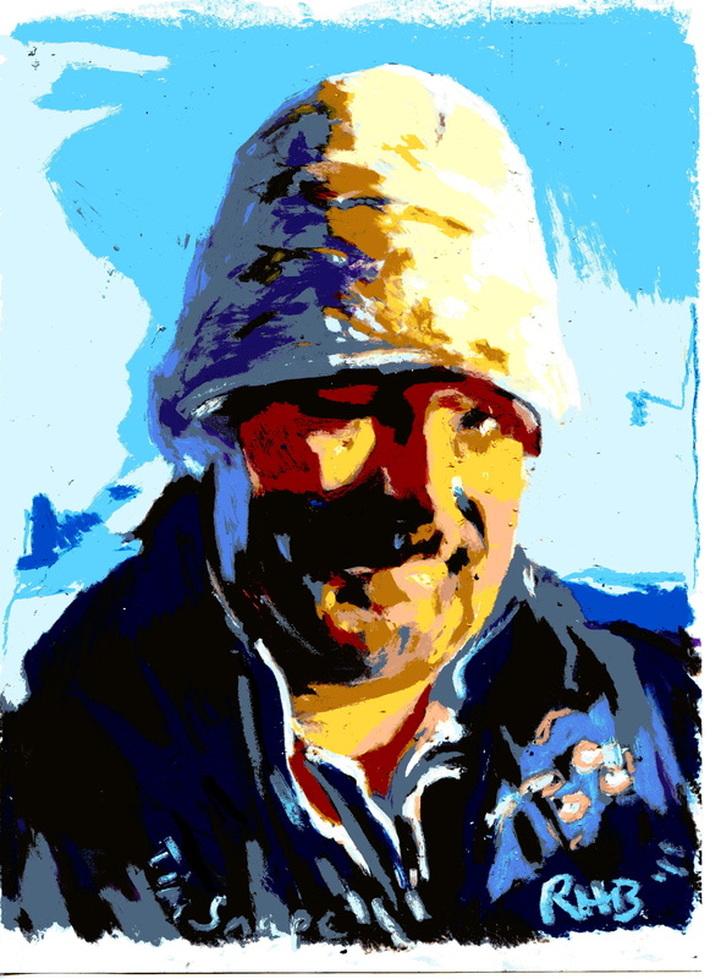 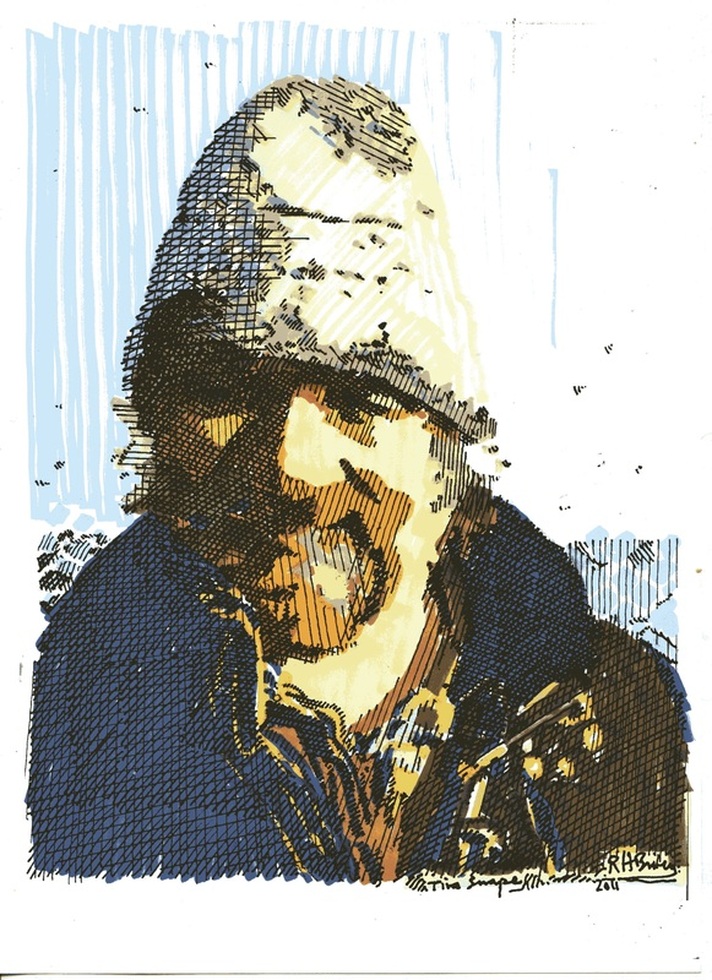 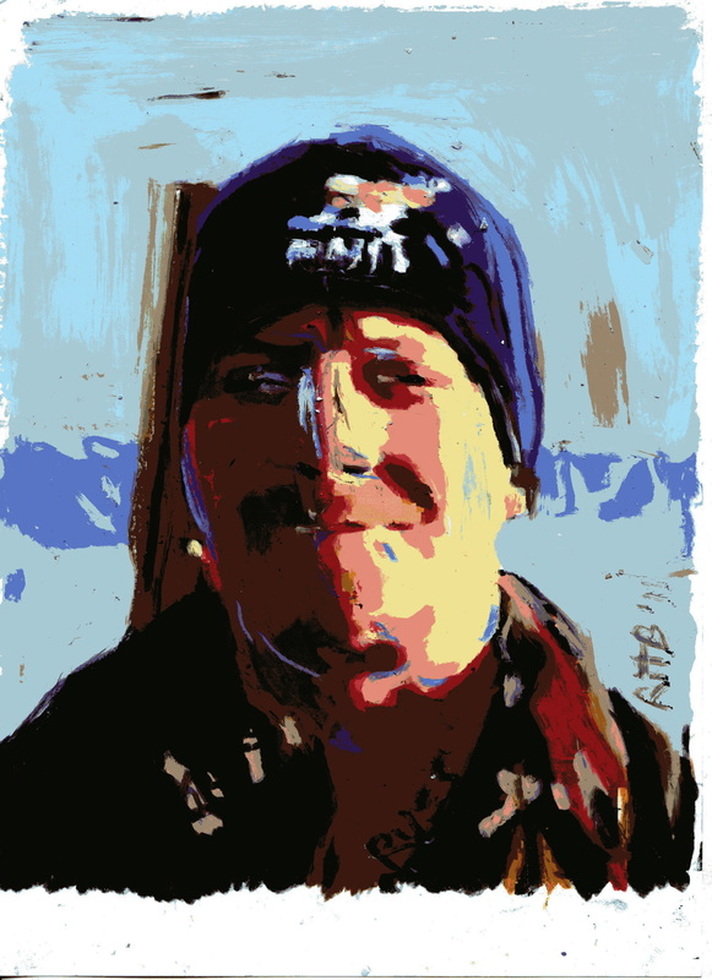 In May 2013, days before my 59th birthday, I sold my beloved Adventure Island to a young policeman from Portsmouth who was desperately keen to own this particular design. I was not using it much, because it was becoming increasingly uncomfortable as I grow ever more stiff. It was a wonderful thing to have experienced the thrill of sailing again, long after I had thought I couldn't because of my Parkinson's. As it is, I will still be able to go out occasionally as a crew member with my friends.