These are a few miscellaneous pictures - I discover undisplayed artwork from time to time and scan or photograph these (the quality is OK-ish) to post here. 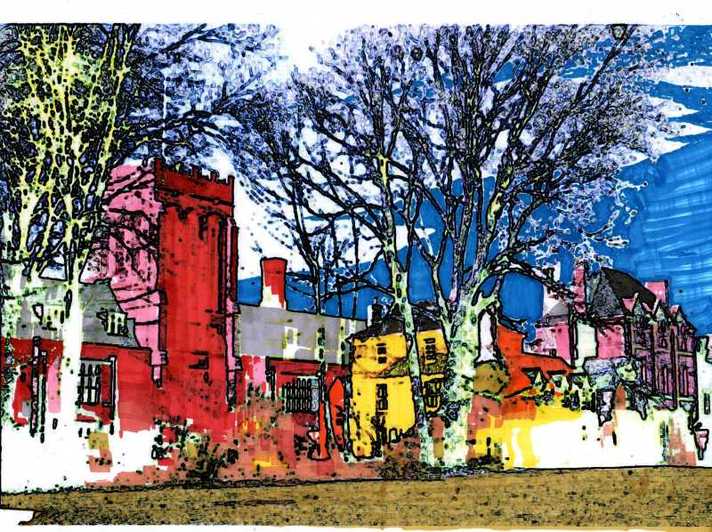 This coloured drawing is of Eastbourne College, from an old photograph I discovered. This side of the tower is where Posy lived, part of our little gang. We had a fantastic playground in this campus and frequently played 'kick the can', 'hide 'n seek he', 'Coventry', the 'Waving Game', and the like. When it was wet on a Saturday we retired to Posy's house to play Murder in the Dark, followed by the ITV World of Sport ALL-IN WRESTLING! The sun always shone on its appointed day - SUNday - and the snow always fell in winter so that we could extend our playground to the slopes of the Downs near Paradise Woods. There were two main runs here: the short steep one or the less steep but much longer one.

This was truly my Paradise, where I spent my eternal childhood - eternal that is until boarding school....

"The Way through to Beyond" - oil pastels, pens & pencils, tippex 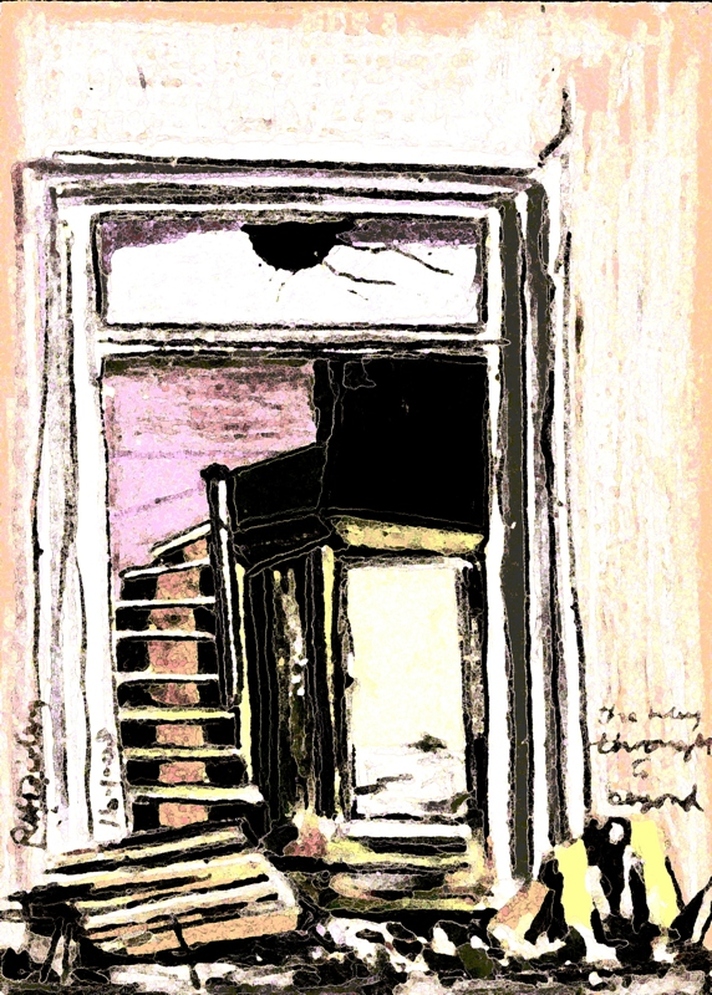 The Way Through to Beyond
My mother was on hand to drive me across to Calne to draw this picture of a ruined doorway and house interior, which I needed to do as a study for a much larger painting I had to do for my A level art exam. She patienty waited whilst I sketched all the images of demolition I could find - demolition being the topic I chose from the list on the exam paper. I gave all the finished artwork in and never received any of it back again, but had taken a photograph of a doorway study from which I've worked up this sketch.

My wife & I visited our daughter Anna during her first year at Durham University - where she is already in her final year.... how time whizzes by! - and we experienced the coldest spell for many a year. There was widespread hoarfrost caking all the vegetation in crystal icing, and the air temperature was always several degrees below. There was enough wind to make the already cold temperature bitingly uncomfortable and I empathised with those who were struggling to keep warm. I have always been able to take basic house warmth for granted - how on earth do rough sleepers survive, and those too poor to heat their own homes? During our visit here we ventured to the coast where the imagination was enormously exercised by the knowledge that in the mining days men worked in pits that extended many miles under the sea. The impoverished would gather bits of coal from this very beach and all along the coast to supplement their meagre domestic fuel supply; the 'sand' is a dirty yellow/grey.

The bleak beauty of this coastline struck me as we wandered along deserted clifftop paths. The occasional two-carriage train ran parallel to the sea, carrying folk to and fro Newcastle and Sunderland and I better appreciated the reasons for the intensity of the almost tribal support local people had for one or other of these football clubs. A bitter rivalry indeed! But the weekend footie must have provided a very necessary layer to the harshness of everyday life, and provided a distraction and for some - a very lucky few - an alternative profession.

When my daughter Sam married Mike Carhart-Harris whose roots are in Chester-le-Street we had a coachload of his relatives from this region travelling south to their ceremony in Kingston Maurward House [just outside Dorchester]. At the wedding I arranged that old music hall favourite Blaydon Races as a surprise item which went down very well - and was much appreciated by the northerners in particular. The sound-file is posted on the 'Compositions [Orchestral]' page - just click the link. 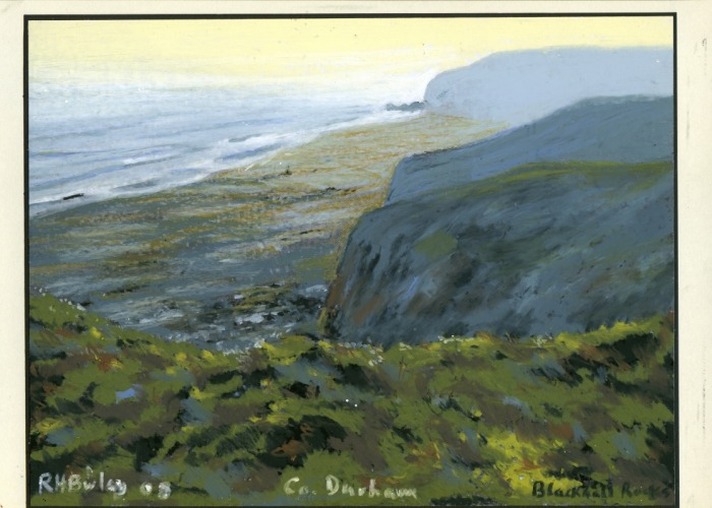 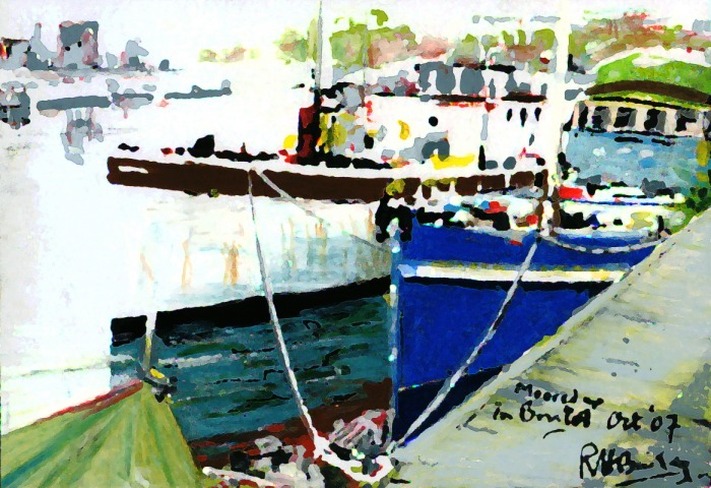 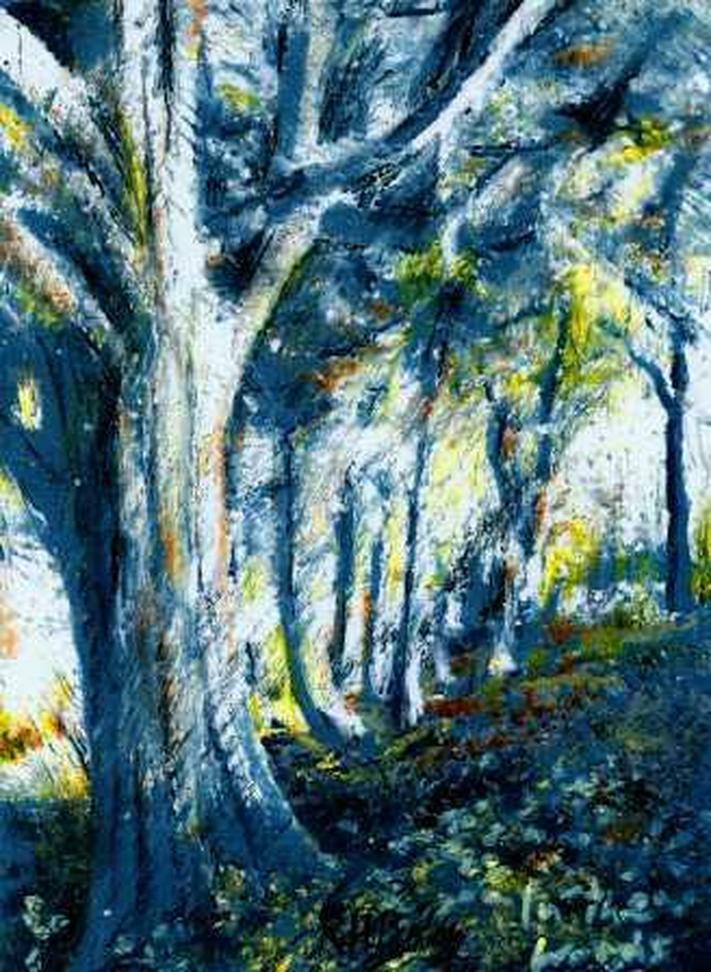 'In the Woods' [oil pastel]
These trees are in the woodland above Montacute House. There was a quality of light I tried to capture, with a lowish sun streaming through the trunks and branches. 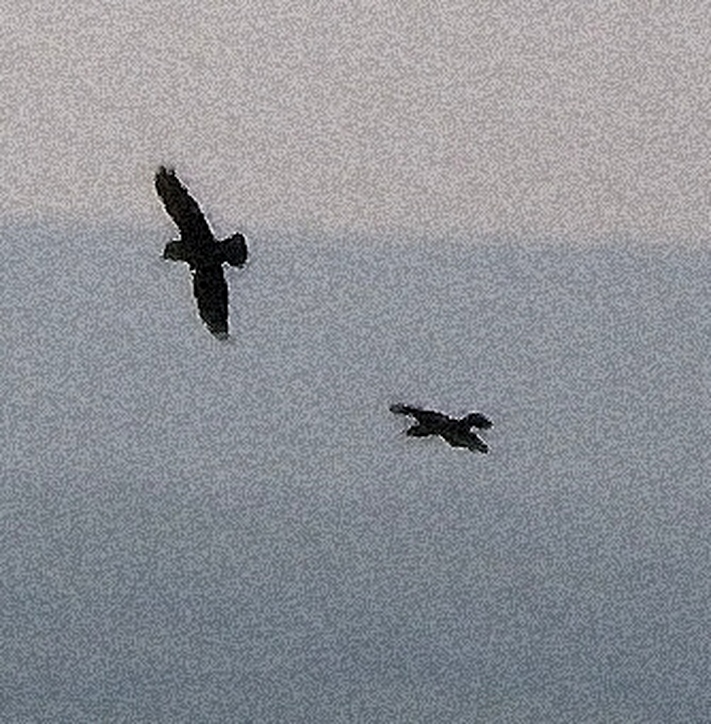 Two Ravens - masters of the air: an edited photograph 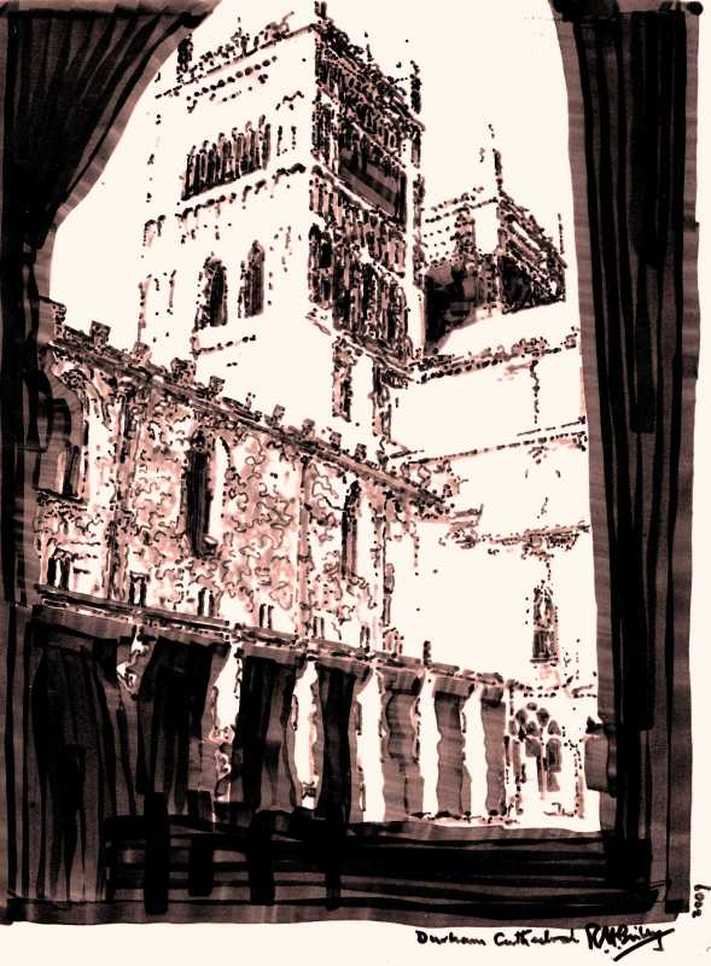 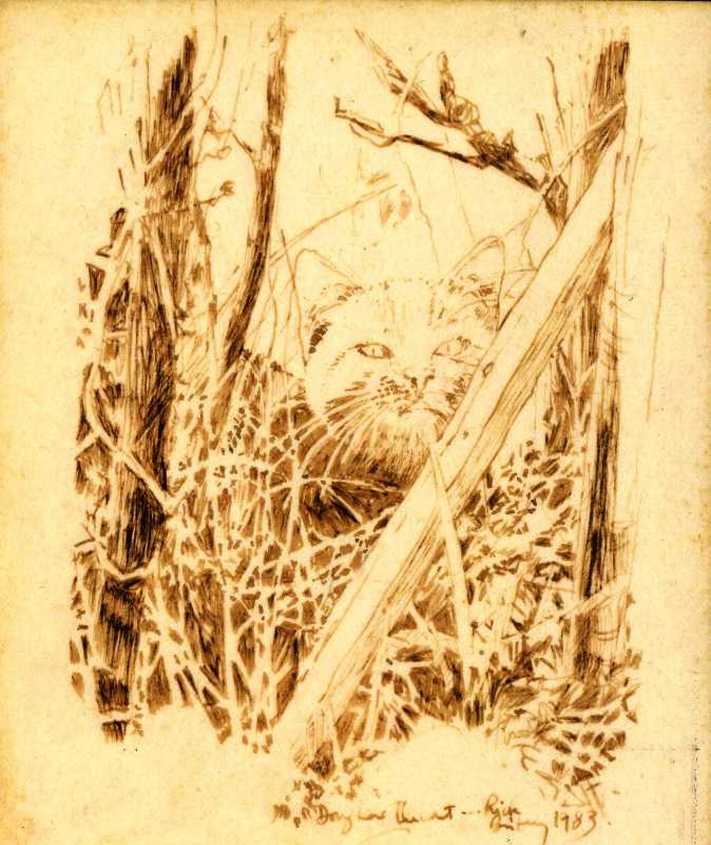 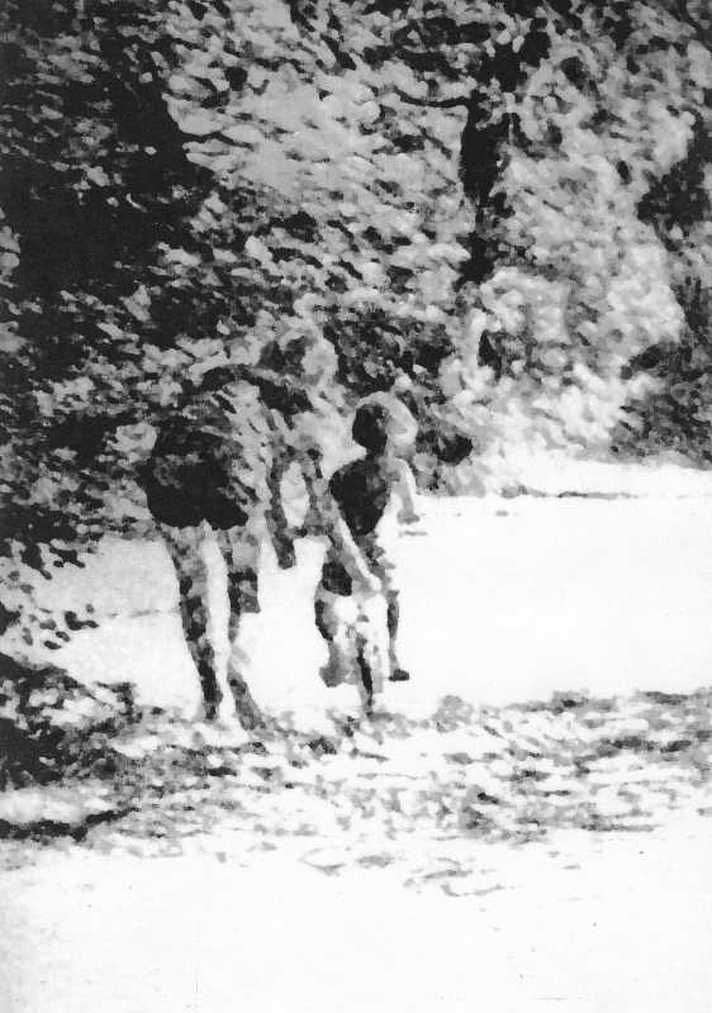 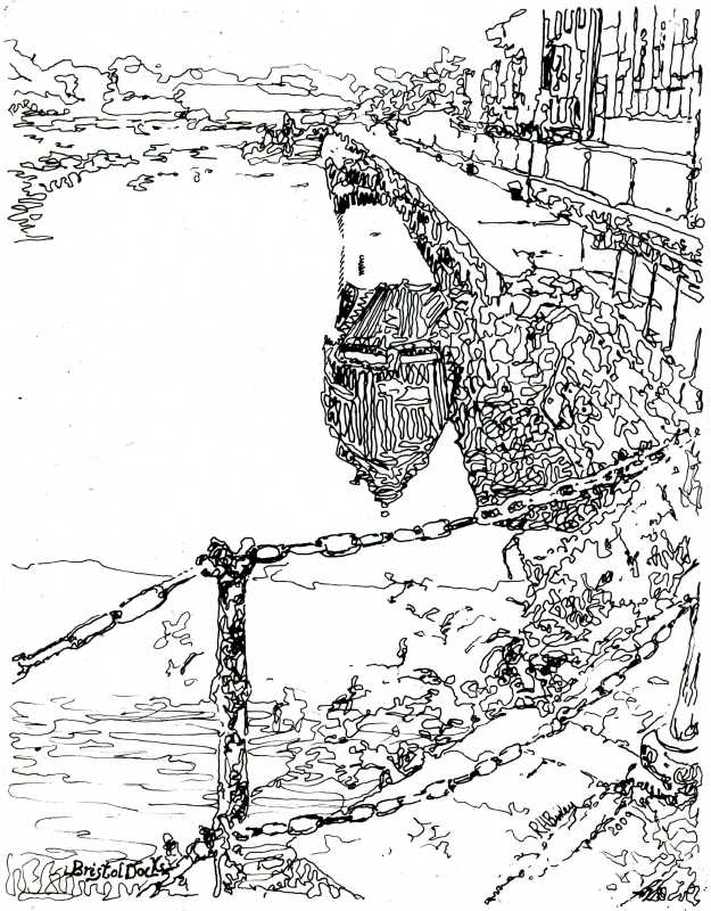 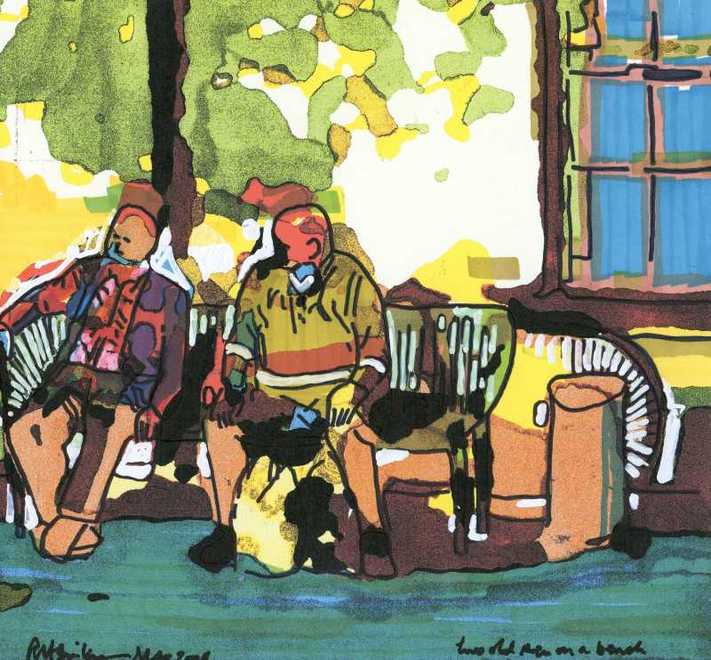 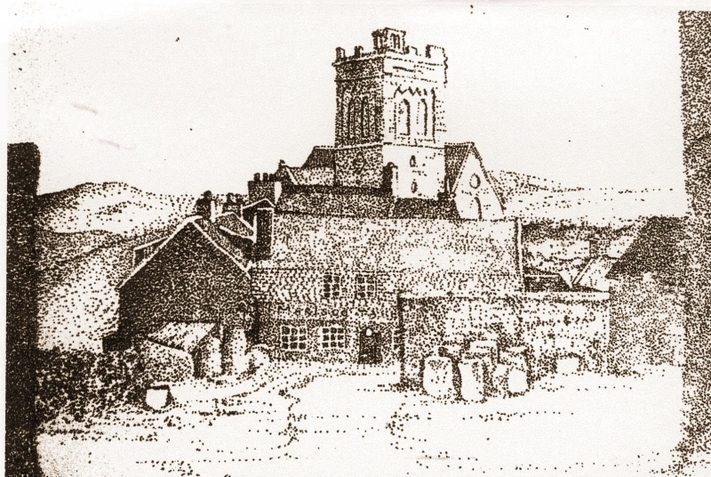 
​Greenhouses 'round the back' - Marlborough College in the 1970s [drawing] 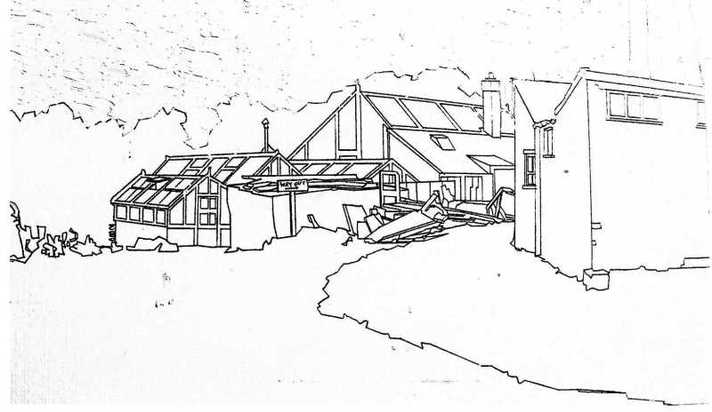 Greenhouses 'round the back' - Marlborough College in the 1970's

​(i) Surgery queue (my brother is the doctor by the car) 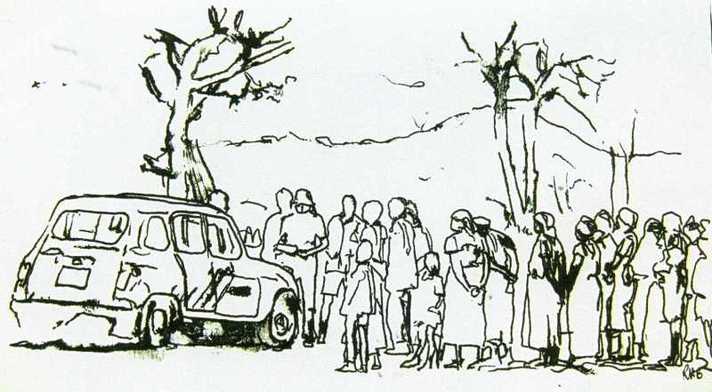 Surgery queue in Malawi [my brother is the doctor] 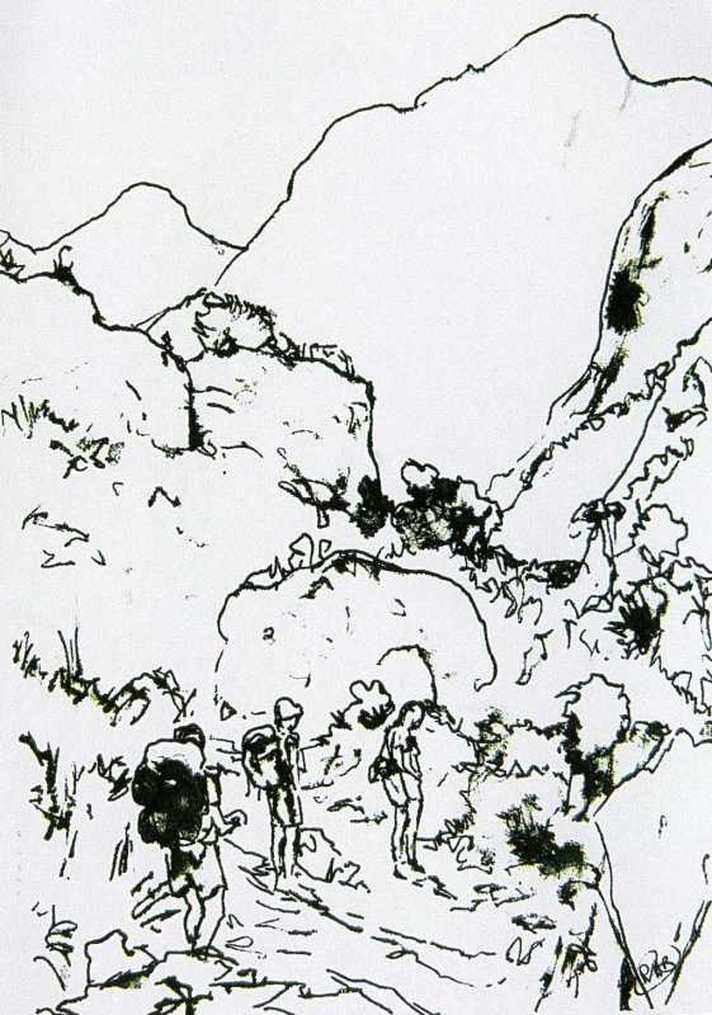 Walking with my mother, brother and younger sister on Mulanje, Malawi, near the 'Knife Edge' 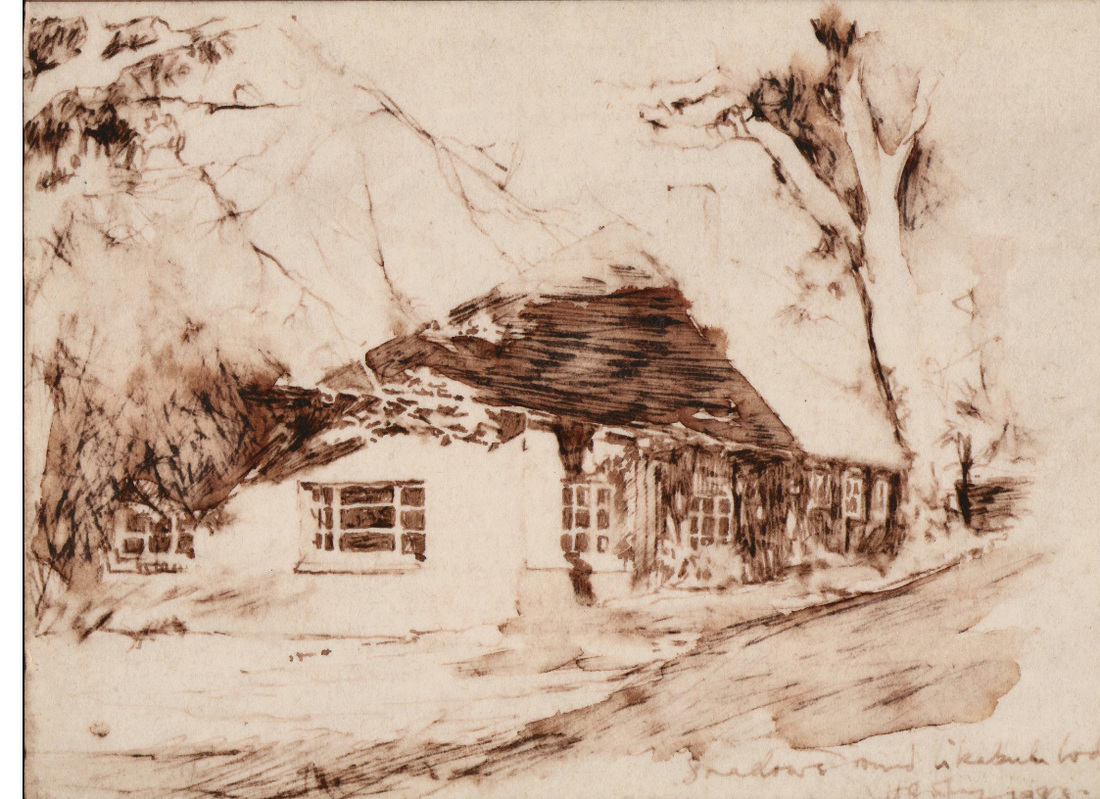 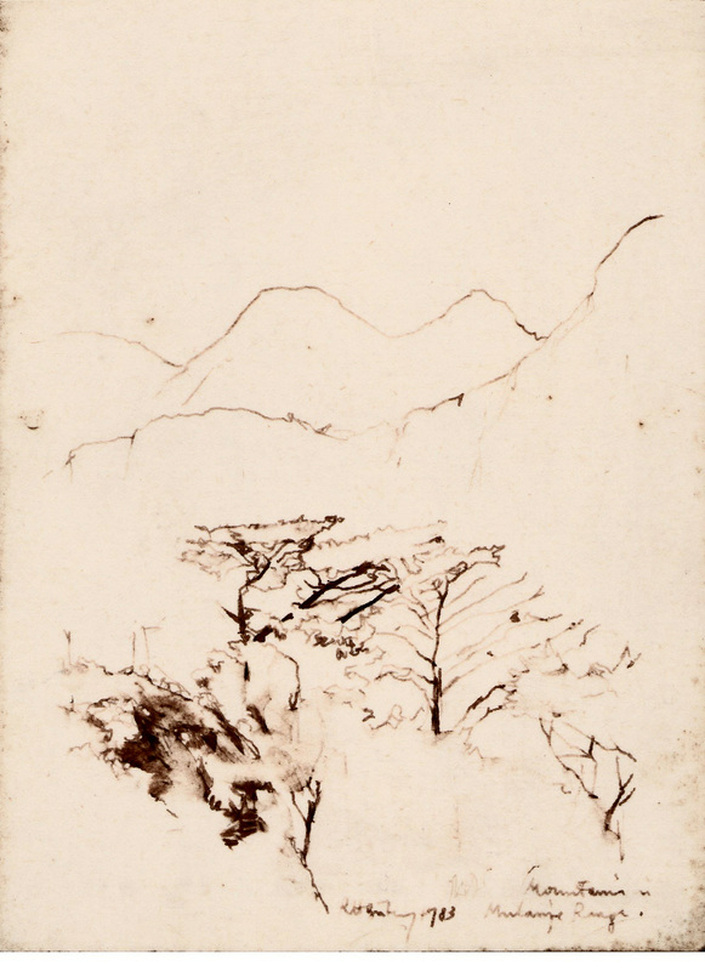 
The back garden of 159 University Rd, Southampton [drawing with wash] 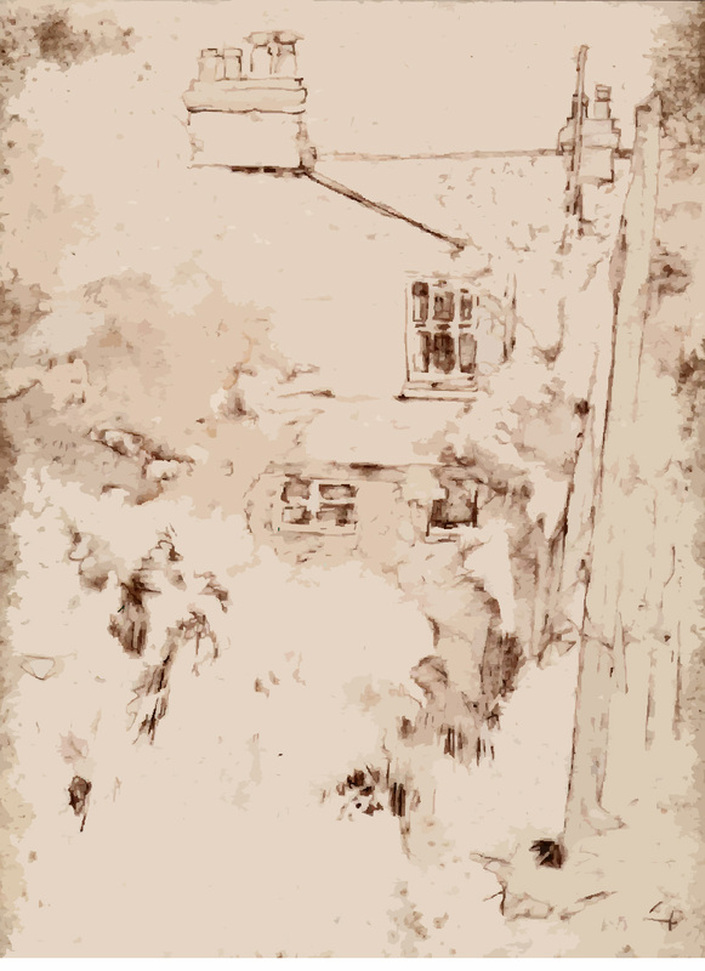 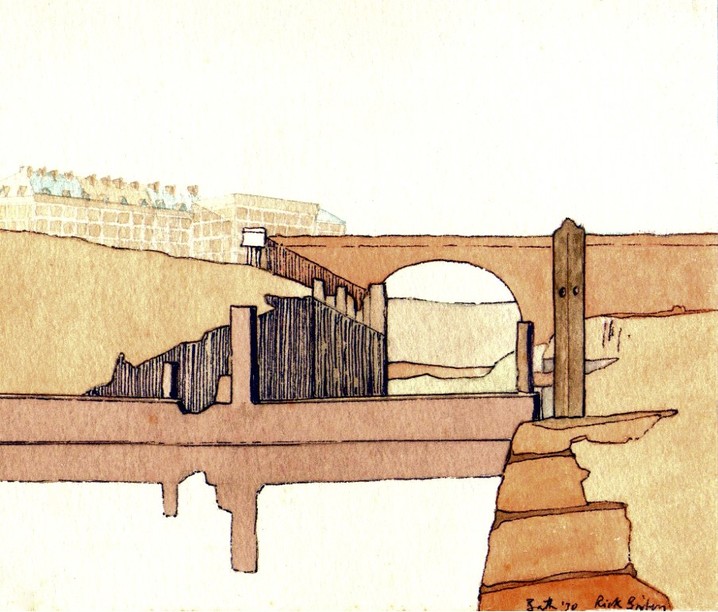 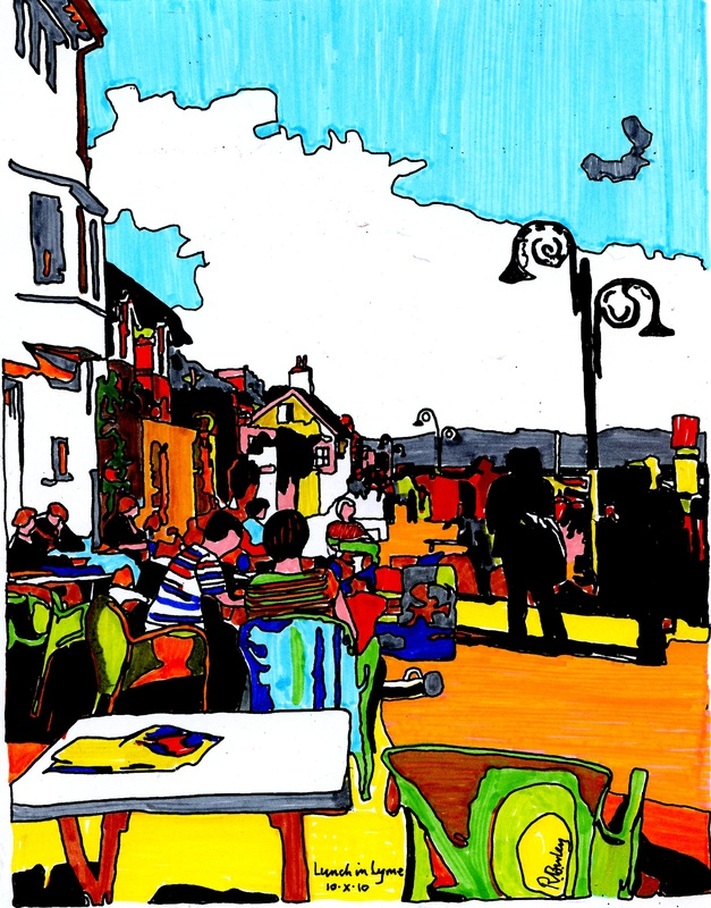 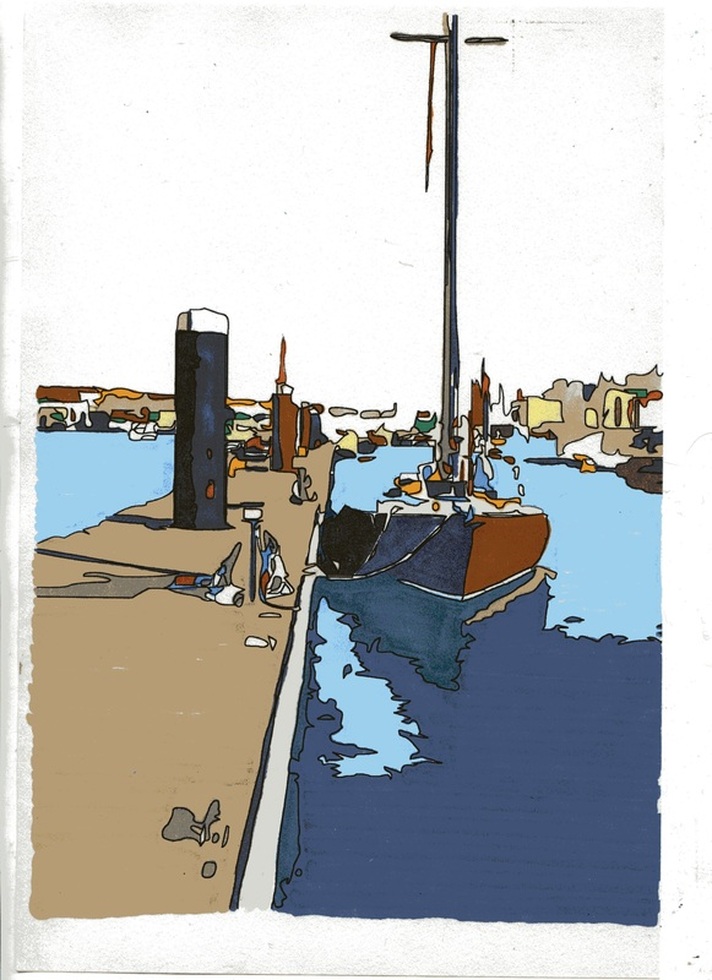 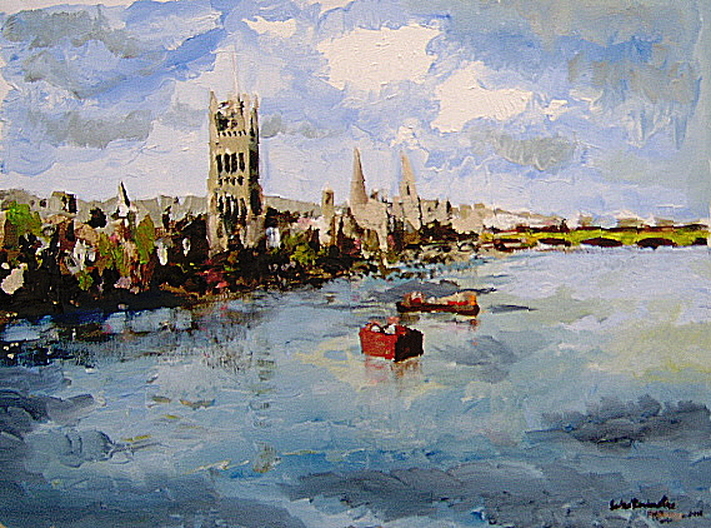 The River at Westminster - Acrylics 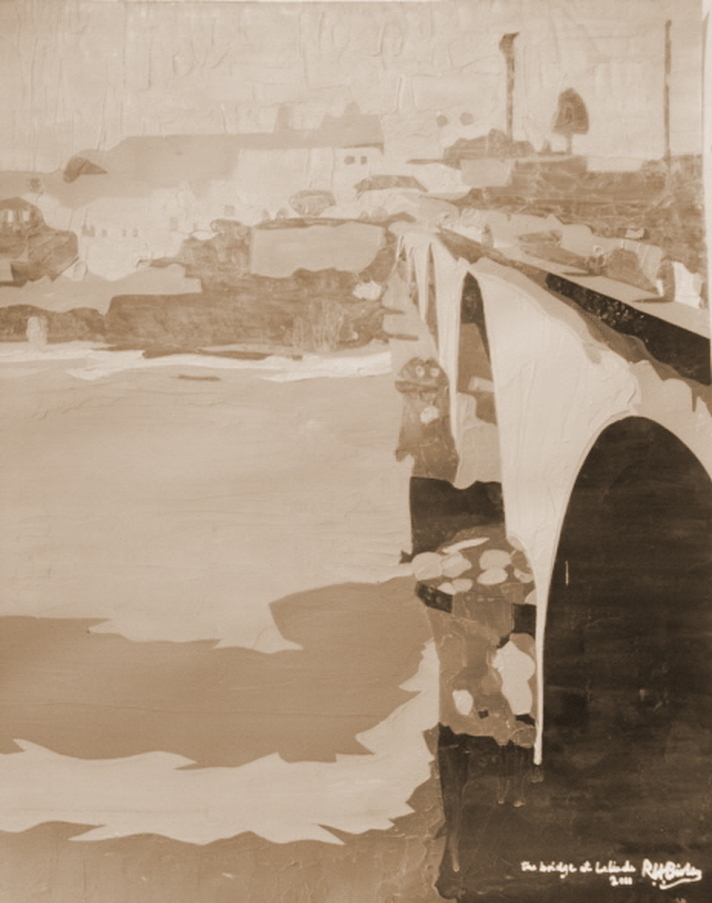 Bridge over the Dordogne at Lalinde - acrylic [sepia] 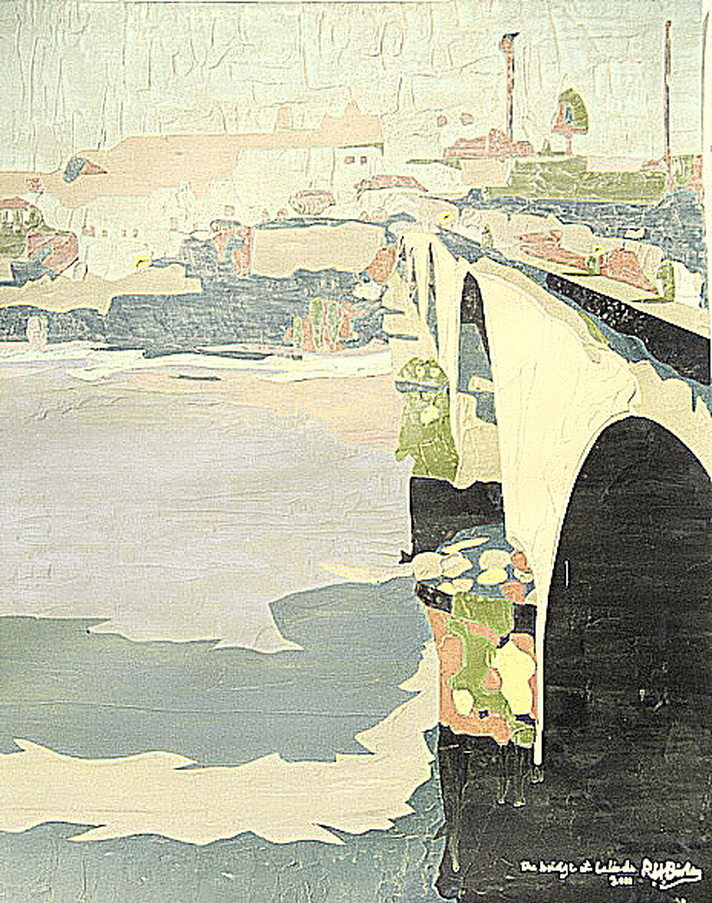 Bridge over the Dordogne - acrylic [original]

This frivolous mock political poster makes use of an image of a Chinese family going about their business on bicycles early one morning in April 2011. I made the Mao image from one of the numerous photos available online. The characters came off an image depicting the red flag being placed heroically over vanquished capitalists.... I hope they do indeed spell 'great leap forward'!

Two composite designs inspired by motorbike trip to Donegal (with Richard Hall) in the '90s. The Tricolor design includes Mt Errigan which is covered with quartz (not snow!); and the harbour of Killybegs. The "NO SURRRENDER" design features Londonderry. Both paintings are gouache on mounting card. 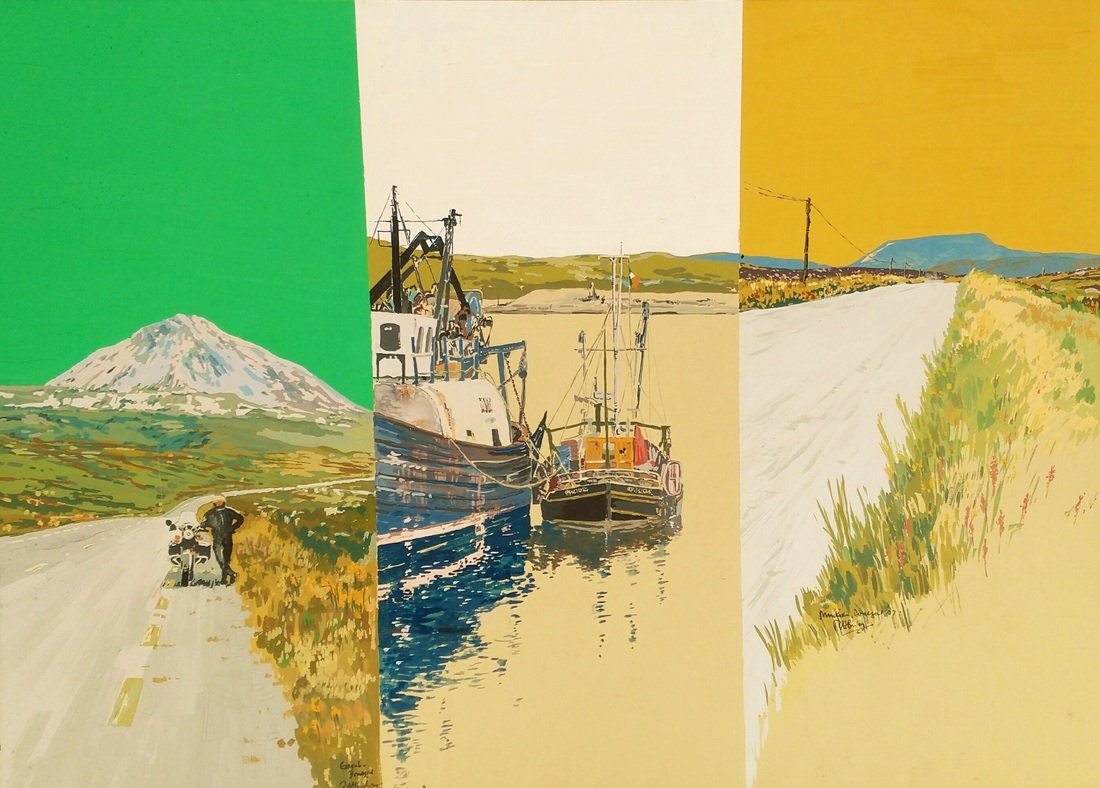 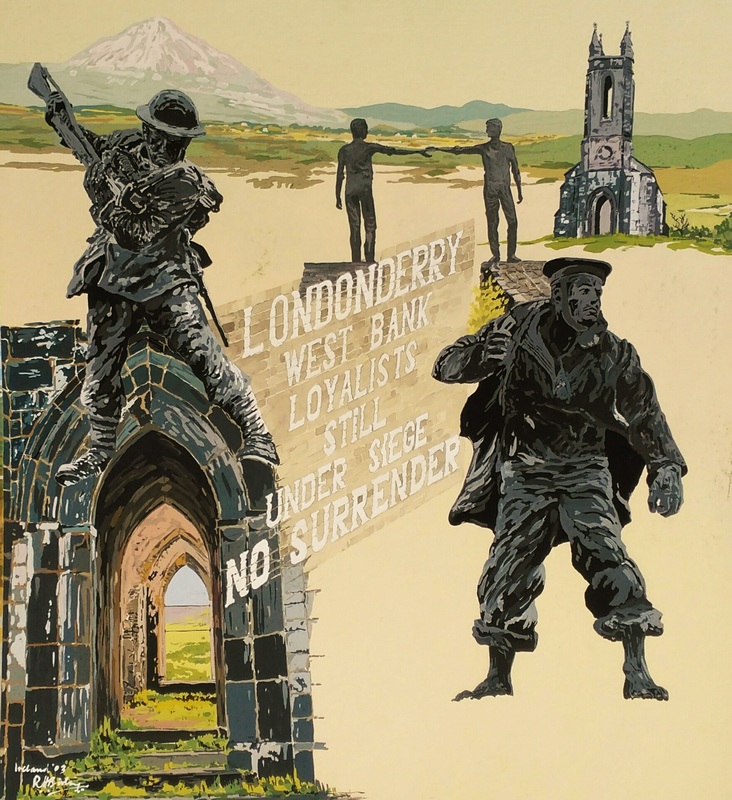